Leading up to the 2018 NBA Draft on June 21st, we will be using our NBA Draft Models (PNSP Model, Role Probability Model, and Similarity Scores) to investigate this year’s top prospects. These Prospect Profiles look at which stats affect NBA projections, present unique data points from a player’s stats, and give relevant comparisons to current NBA players. You can find all of our Prospect Profiles here or through the header menu above (NBA –> NBA Draft –> Prospect Profiles). In today’s article, we look at Zhaire Smith.

Zhaire Smith came out of nowhere to lead Texas Tech to the Elite Eight and soar up draft boards to the point where he could go in the lottery. Opinions on the 19-year-old Texas native are all over the board, as he has some glaring strengths and weaknesses that NBA teams have been dissecting over the last month.

Smith’s PNSP score of 48.1 pegs him as an average prospect and ranks 41st overall (9th among wings) in this year’s class. He does get a more favorable outlook from our NBA Role Probability model, although it still does not rank him in the teens where he is projected to be drafted:

Any way you slice it, our models are not extremely high on him. That said, there are some more promising rankings than his 41st in PNSP. As a different view, the Stepien’s player distribution tool gives Smith considerably more upside than our models, marking him with one of the highest ceiling outcomes in this draft. The methodologies between this tool and our NBA Role Probability Model are vastly different, but, at the end of the day, they are trying to answer the same question. It just goes to show that it is an extremely difficult question to model and that there are multiple ways to tackle it.

Some notable wing draft picks who had similar PNSP & Role Probability projections to Zhaire Smith coming out of college: Marcus Morris, Gary Harris, Terrence Ross, Wayne Ellington, Dion Waiters, and Chris Douglas-Roberts. These players all carved out some sort of role in the NBA despite relatively poor model predictions, although, there isn’t really much upside in that list.

Smith’s top similarity scores produce a very interesting list. Most of these players were/are no more than bench/role players in the NBA, making contributions as rebounders with decent 3-point/free throw shooting. I love that Jason Richardson makes the list – one of the best dunkers of all time and a freak athlete that provides a good illustration of Smith’s athletic ceiling. Richardson was a career 37% three-point shooter and 71% free throw shooter (similar to Smith’s college numbers) and was a decent all-around player in terms of box score contributions. I was surprised to see that Jayson Tatum actually had very similar TRB%, AST%, STL% numbers to Smith in college (Smith had a much better BLK%), though Tatum profiled as a much better shooter coming out of Duke last year. 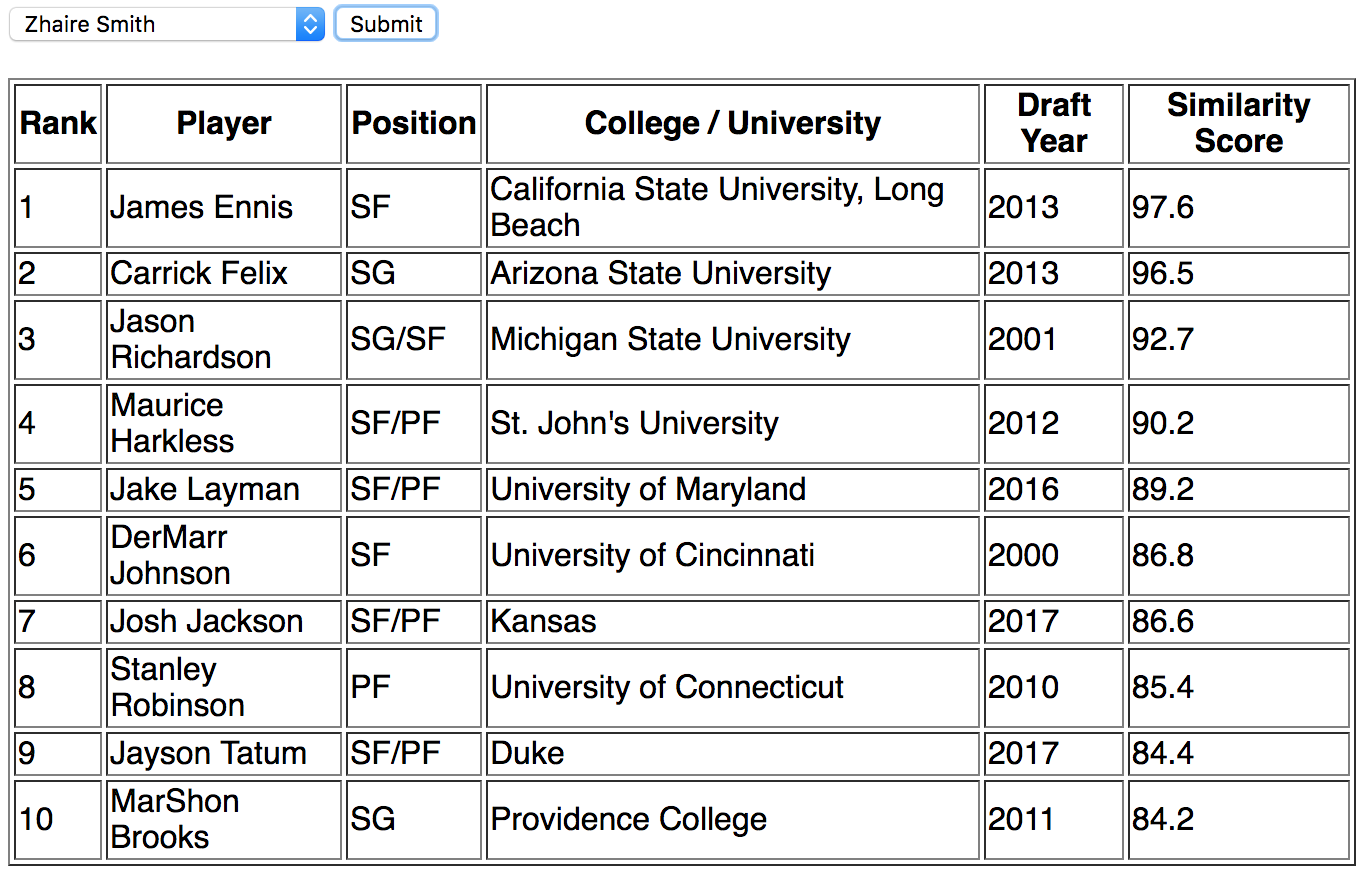 While Smith does have solid length (6-10 wingspan) and athleticism, he is still somewhat small for an NBA wing at 6-4, 200 lbs.

Smith is somewhat of a late bloomer and has been consistently rising up draft boards throughout the past year. This does hurt his projection, as he had a very low recruiting ranking heading into college (#223 RSCI), and comes out in the fact that he didn’t start until the 16th game of the year. However, by the end of the year, he was 2nd on the team in minutes played and led the Red Raiders in TS% and BPM.

Even though he was an efficient player, Smith was not a volume scorer and did not exactly fill up the stat sheet, averaging just 7.5 FGA, 1.1 3PA, 1.8 AST, and 11.3 PTS per game. Historically, it is rare for a low volume producer like Smith to suddenly turn that switch on in the NBA. Smith projects below average in assists and rebounds and does not profile as a creator/primary initiator in the NBA.

As one of the youngest players in the draft, Zhaire is an explosive athlete who showed great intensity and feel for the game in his lone college season. Although he wasn’t a high volume contributor, he did finish 7th in NCAA in Box Plus/Minus, meaning he was one of the most influential players in the NCAA last season.

Given his length, athleticism, and the versatile nature in which he was used at Texas Tech, Smith profiles as a multi-positional defender in the NBA. Zhaire projects slightly above average in blocks and steals for an NBA wing (though far from the elite level he is frequently discussed at). He did have good steal and block metrics in college, which are generally a decent indication of defensive ability as far as box score stats go. Here is a list of college freshman forwards from power conferences who logged a steal percentage of 2%+ and a block percentage of 4%+:

Smith does project as a slightly above average scorer for an NBA wing, mostly coming on the inside and at the free throw line. In college, Smith shot 65% at the rim (83rd percentile among NCAA wings). His athleticism and length should serve him well in continuing to finish effectively inside.

Smith projects as a slightly below average 3-point shooter in terms of both volume and accuracy by PNSP. He was not a volume shooter from the mid-range/perimeter (65% of his FGA were at the rim), and he only attempted 40 three-pointers this year but did convert on 18/40 (45%). He did not make a three-pointer in 22 of his 37 games played and never attempted more than 3 three-pointers in a game. On top of that, Smith was not a great free throw shooter (91/127, or 72%). Given his rapid development and low volume of 3PA, it remains to be seen whether he is someone teams will leave open or stay honest against when he is on the perimeter.

Based on our models, Smith’s contributions as an NBA player seem most likely to come as a defender and supporting scorer, likely with the bulk of his production coming at the rim. Our models do not see the extreme upside that is frequently discussed with Smith. While there are reasons to believe that the models under-value Smith, the point of the model is to keep our biases in check and, in Smith’s case, remind us that historical players of his profile have generally not lived up the hype in the NBA.