Leading up to the 2018 NBA Draft on June 21st, we will be using our NBA Draft Models (PNSP Model, Role Probability Model, and Similarity Scores) to investigate this year’s top prospects. These Prospect Profiles look at which stats affect NBA projections, present unique data points from a player’s stats, and give relevant comparisons to current NBA players. You can find all of our Prospect Profiles here or through the header menu above (NBA –> NBA Draft –> Prospect Profiles). In today’s article, we look at Jaren Jackson Jr.

Jaren Jackson Jr., or “Triple J” as Marc likes to call him, is a PF/C prospect who has worked his way up NBA Draft Boards over the past couple months and is now projected to be a top 5 selection. Jackson put together some impressive numbers in his one season at Michigan State, including finishing 2nd in the NCAA in Box Plus/Minus (15.4). Two initial benefits to Jackson’s NBA projections are his age (18.6 years old – among the youngest in the draft) and his high school recruiting rank (#9 RSCI). He has made significant strides in the last year, theoretically adding to his upside, as he appears to be somewhat of a late bloomer. Jackson is also the son of former NBA player Jaren Jackson Sr. – maybe dad has taught him a thing or two about what to expect from NBA life. Safe to say there is a lot to like about Jackson’s NBA potential.

As a reminder, PNSP ranges from 0-100 with a roughly normal distribution; Jackson’s PNSP of 97.1 is one of the best historical scores we have measured among big men and ranks 2nd in this draft behind only Luka Doncic. Remeber that PNSP is calculated among position groups, so a direct comparison of Luka and Jaren’s PNSPs is not necessarily apples-to-apples, and, obviously, this means Jackson’s PNSP ranks 1st among big men in the 2018 Draft. Jackson also sports a very low Non-NBA Probability at 6% (or a 94% chance that he finds some sort of role in the NBA), which ranks 5th best in the draft class. While his 30% All-Star probability is very high relative to all prospects, it only ranks 8th in this draft and puts him behind fellow bigs DeAndre Ayton (59%), Mohamed Bamba (50%), Marvin Bagley III (39%), and Wendell Carter Jr. (38%). Here are the historical bigs with similar PSNP & Role Probability projections coming out of college:

Jackson projects off the charts on 3-point shooting for a big man, which isn’t a surprise considering he shot 40% from 3 and 80% on free throws at Michigan State, including an insane 26/58 (44.8%) on NBA 3s, which ranked in the 92nd percentile among NCAA bigs (per Will Shreefer). Jackson’s outside shooting should allow him to space the floor well in the NBA, and, further, he has flashed the ability to drive to the basket when his outside shot is contested. 82% of his shot attempts were either at the rim or a 3-pointer, a seemingly perfect role for a modern big man. Jackson was also efficient on the inside – his 64% shooting at the rim ranked in the 82nd percentile among NCAA bigs (per Will Shreefer). Overall, he projects well above average as a scorer, doing much more damage from the 3-point line than the average NBA big man.

Similar to the offensive side of the ball, Jackson also seems capable of serving all needs of a modern big man on defense:

Jackson projects above average for an NBA big in terms of both steals and blocks – which are historically decent predictors of defensive ability. Jackson finished 2nd in the NCAA in Defensive Box Plus/Minus (10.3) – here is a list of college freshman since 2009-10 with a DPBM of at least 10.0 and a positive OBPM:

While that list puts him in #ELITE company, his Similarity Scores are a bit more puzzling. The first thing to notice is that his most similar player is just a 79.4 – most other players have a handful of comps in the 98-100 range, if not their entire top 10 list. This isn’t necessarily good or bad but merely means that we have not seen many historical players of Jackson’s archetype. Which isn’t terribly surprising considering his high outside shooting rate for a big man. For example, the 5 bigs in the list above had 20, 8, 5, 0, & 0 three-point attempts in college and Jackson had 96…. If we are to conclude anything from this list (which is debatable), we could say that these players had mixed levels of NBA success and two logical comparisons to Jackson are Myles Turner and Chris Bosh, as athletic big men who are + defenders/rebounders and can shoot 3s. 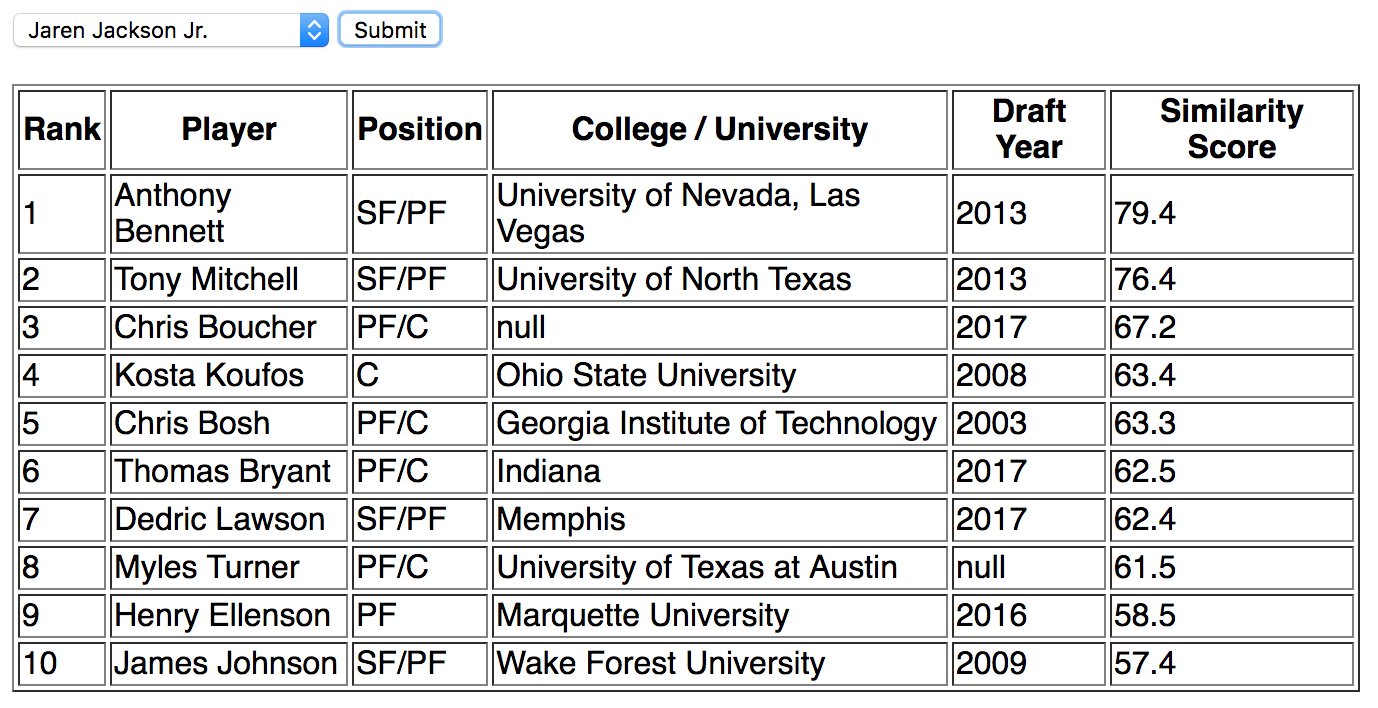 Jackson projects as an above average NBA big on both offense and defense. He fits the ideal profile of a modern NBA big with his ability to shoot 3s, finish at the rim, defend the perimeter, and protect the rim. While he will prove valuable by merely fitting that profile, it remains to be seen exactly what his offensive upside is. At this stage, he does not appear to have the decision making and passing skills necessary to be a difference-making playmaker on the offensive side of the ball. As we mentioned, he is still coming into his own as a basketball player, and thus his playmaking development may be the difference between becoming a Clint Capela / Rudy Gobert compared to a true difference-making offensive big such as Karl-Anthony Towns / Anthony Davis.