A couple months ago, we put together a My Model Monday series article that did a text and sentimental analysis of NBA Draft Prospects based on scouting reports. For those that are unaware, sentiment is “the process of computationally identifying and categorizing opinions expressed in a piece of text, especially in order to determine whether the writer’s attitude towards a particular topic, product, etc., is positive, negative, or neutral.” Using Bing Liu’s graded sentiment dictionary, we can analyze text to and identify who is more positively written about. For more information, please read our My Model Monday series article.

Now, we can apply this text analysis to the 2018 NBA Draft class. First, given the recent rise of The Stepien (a great NBA Draft website), I scrapped The Stepien’s Draft profiles on roughly 40 top prospects, where available, in addition to our continued analysis of NBADraft.net. This should give interesting comparison points. The Stepien similarly has Draft Profiles with strengths and weaknesses for most prospects.

Without further ado, below is our the Sentiment Scores from The Stepien: 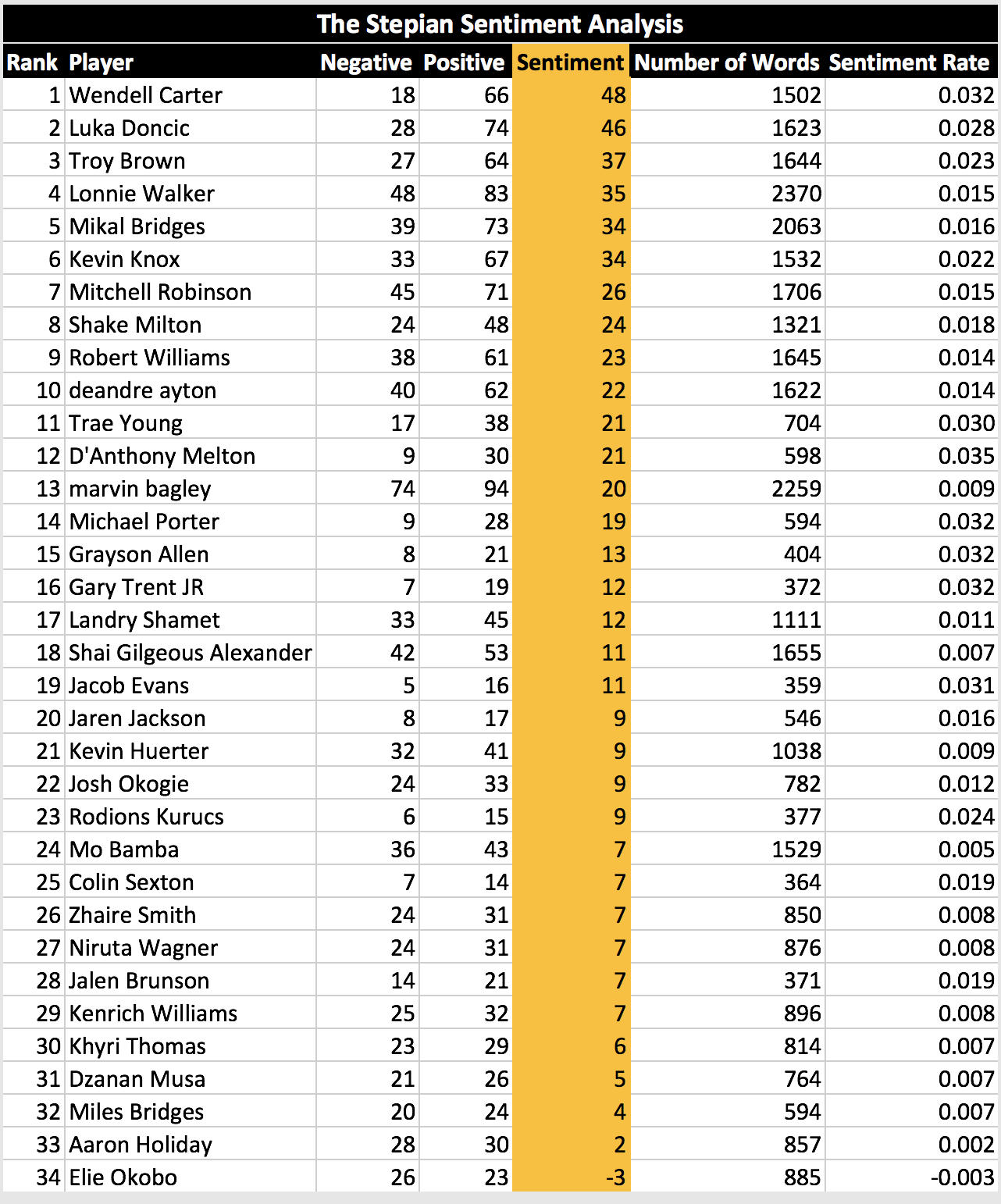 If you read The Stepien, it’s probably not a surprise that Wendall Carter Jr. and Luka Doncic are atop the rankings for most positive sentiment. The Stepien and Cole Zwicker have spoken highly of both prospects, and rightly so, as our draft models also rank both these prospects highly. Another prospect the Stepien’s consensus has ranked highly is Jaren Jackson Jr. Interestingly, he ranks fairly low by sentiment score, but the number of valid words scrapped on him is significantly lower. When looking at sentiment rate, he comes out slightly higher.

Following a similar exercise for articles written at NBADraft.net, we get the following scores: 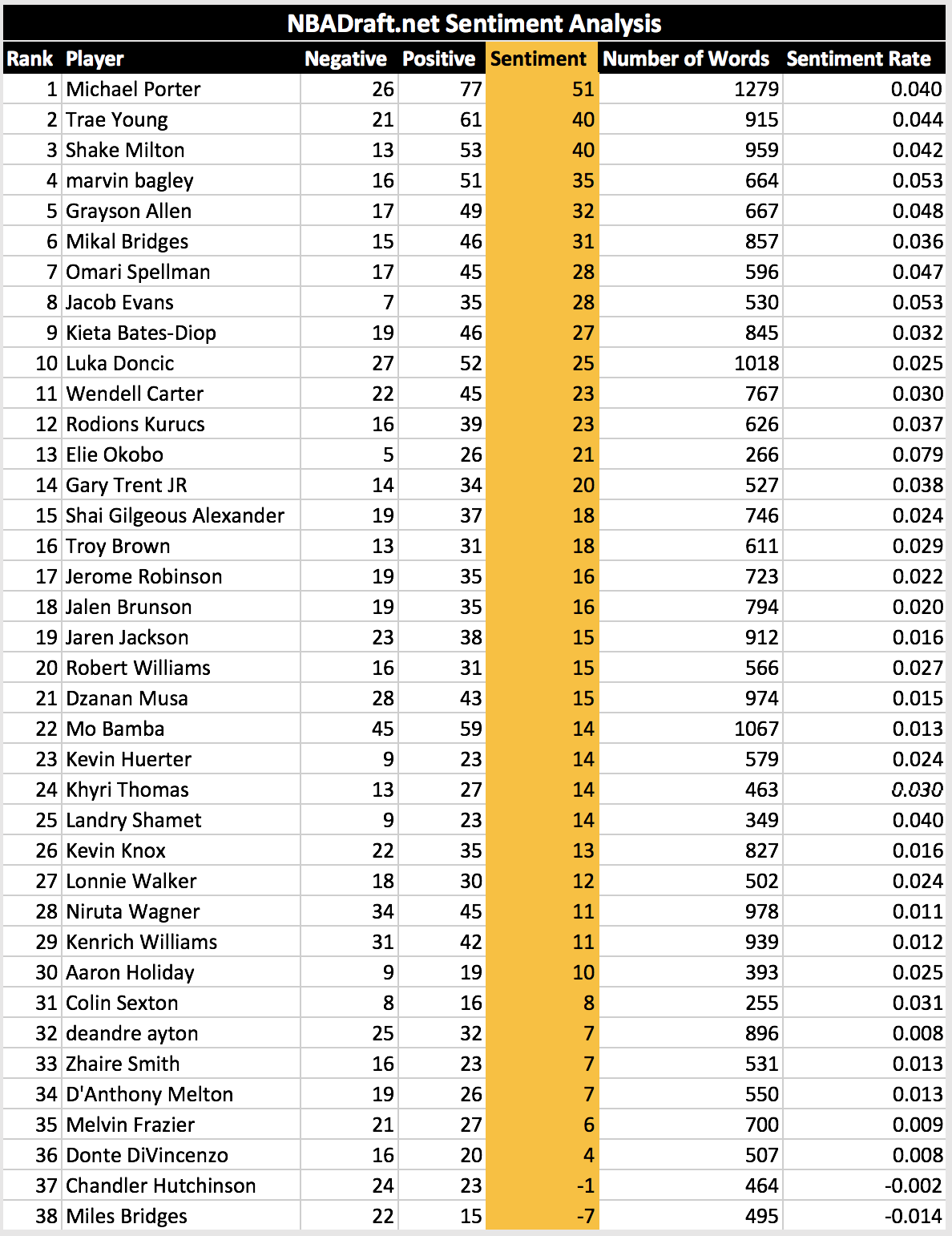 Michael Porter Jr. lands atop the NBADraft.net sentiment score rankings. Shake Milton and Mikal Bridges make the top 10 on both sites, maybe that’s a sign? Tough to know, but interesting none the less. If you recall from our first article, there were not necessarily strong correlations between these sentiment scores and NBA success, but, lining up with a new draft class, it is definitely helpful to see how players are being perceived. Here are the ten words that were recorded at the highest rate among all articles for 2018 prospects: 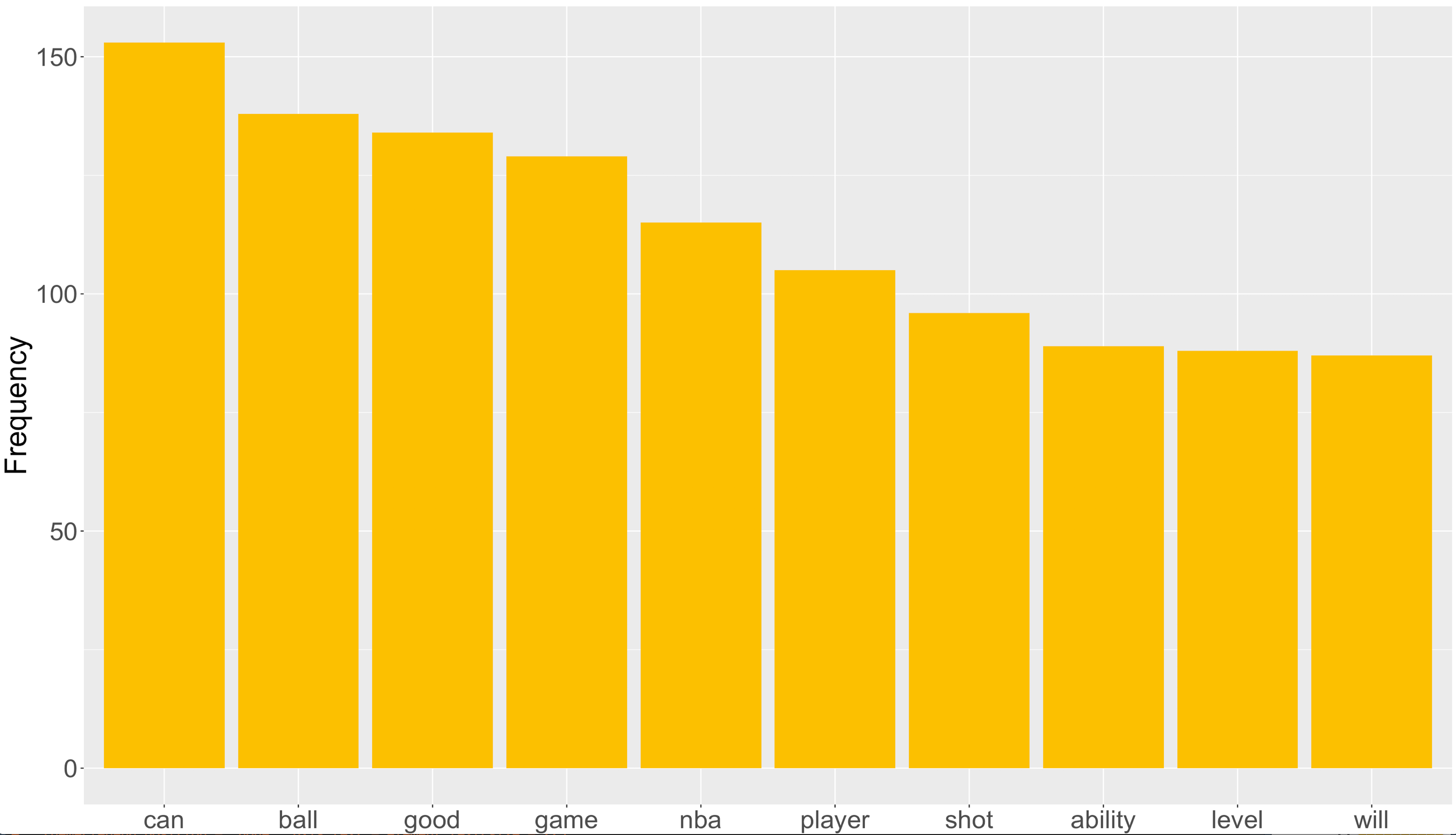