Last week, I introduced the Pitcher Count Predictivity Score, a new stat to measure pitch mixing. PCPS is a very general, simplistic measure. It has to be! There are so many different types of pitchers, with such diverse arsenals of pitches, that a stat must be very broad to apply to all of them. This broadness is an asset, in that it allows us to compare very different pitchers on a similar scale, but it also means that PCPS doesn’t tell the whole story about a pitcher.

To demonstrate how PCPS fits in with a comprehensive analysis of a pitcher’s mixing, I’ll be writing throughout spring training about each of the starting rotation candidates for the Twins. The goal is to get a feel for what to expect, pitch selection-wise, when watching a start by any given Twins pitcher. How does he use his arsenal to keep hitters guessing and get them out?1 We’ll answer this by digging into the data from previous seasons. Basically, we’re asking: what did the pitcher throw, and when did he throw it?

Santana was very effective for the Twins last year, and he’s the closest thing the team has to an ace. He does it by throwing three pitches: a fastball, a slider, and a changeup. He throws his fastball just over half the time—53% to both right-handed hitters and lefties. To right-handed hitters, the other 47% of his pitches are almost all sliders. To left-handed hitters, it’s roughly a 32%-15% split between sliders and changeups, respectively. He throws the majority of his sliders low and away from righties and low and in in on lefties. His changeup is mostly thrown arm-side, tailing away from lefties.

Santana’s PCPS last season was 0.117, good for 16th out of 152 in the league last year. This indicates that his likelihood of throwing a fastball varies widely by count. Digging into his fastball percentages in individual counts (using our PCPS Viewer!) backs this up. Santana started an at-bat with a fastball 60% of the time; once he gets a hitter to 0-2 or 1-2, his fastball percentage was half of that. 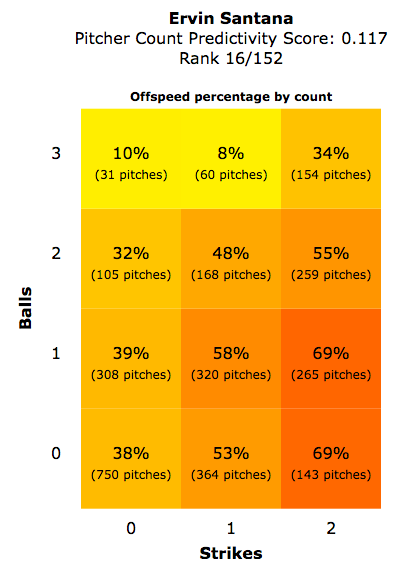 What does this looks like for Santana, with his three pitches? Early on in the count, he’s liable to throw either a fastball or slider. To left-handed hitters, he’ll mix in the occasional changeup, most often when he’s a pitch or two into the at-bat. 2 Once he gets to two strikes, he turns more frequently to his offspeed to get hitters out. To illustrate, let’s dig into Ervin’s two-strike pitches.

At 0-2 (below), Santana relied mostly to fastballs in on the hitter and sliders sweeping low and to his glove side. Most pitches were outside the zone, and he threw no changeups. All plots are from the catcher’s perspective; the left side shows pitches to left-handed hitters, and the right side shows pitches to righties. 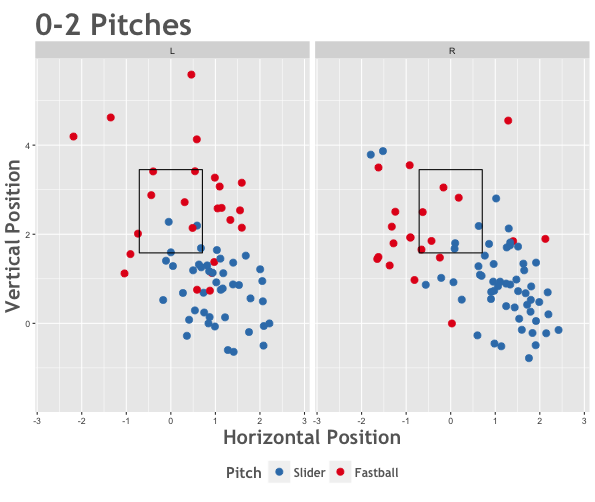 At 1-2, the story was similar, but with the addition of some arm-side changeups tailing away from left-handed hitters.

His tendencies at 2-2 and 3-2 were similar, but without the luxury of pitches to waste, he threw more fastballs and more strikes.

Two more interesting tidbits about Santana—first, his fastball percentage declines as the game goes on, as seen below (innings 8 and 9 aren’t shown due to small sample sizes). This hints at a tendency to establish his fastball early in the game, and mix it up with more offspeed later on.3 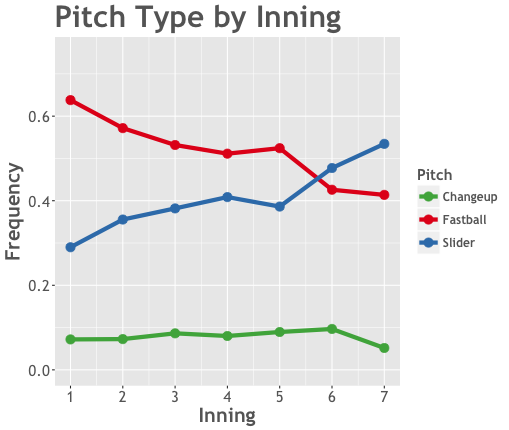 Second, if a right-handed hitter fouls off a two-strike slider, Santana’s more likely to come back with a fastball, and vice versa.4 In the 25 times a right-hander wasted a two-strike slider, Santana came back with a fastball 21 times. Conversely, out of 42 fouled-off two-strike fastballs, 29 were followed by sliders. This pattern doesn’t seem to hold for left-handed hitters, perhaps because he has an extra pitch to work with.

Santana is an example of a pitcher with a high predictivity by count, and therefore a high PCPS score. There are still no absolutes, as he could throw any pitch at any time (0-2 changeups or changeups to right-handed hitters possibly notwithstanding). But in investigating the source of his high PCPS, we get a picture of a pitcher who likes to establish his fastball early in games and in counts, and who prefers to finish hitters off with a slider. When watching a Santana start this season, pay attention to how he establishes his fastball, how he finishes hitters with a mix of inside fastballs and glove-side sliders, and how he sprinkles in his changeup to keep things interesting.