Leading up to the 2018 NBA Draft on June 21st, we will be using our NBA Draft Models (PNSP Model, Role Probability Model, and Similarity Scores) to investigate this year’s top prospects. These Prospect Profiles look at which stats affect NBA projections, present unique data points from a player’s stats, and give relevant comparisons to current NBA players. You can find all of our Prospect Profiles here or through the header menu above (NBA –> NBA Draft –> Prospect Profiles). In today’s article, we look at Kevin Knox.

Kevin Knox was a key member of one of the youngest teams in NCAA basketball history. Over the course of an up and down season, he led the young Wildcats in scoring at 15.6 points per game and eventually helped them to the Sweet 16. Knox has good size for a SF/PF at 6’9″ with a 7’0″ wingspan. He was Kentucky’s primary scoring option, but struggled to contribute in other aspects of the game.

Kevin Knox might be the player with the largest discrepancy between general consensus and our PNSP model’s rankings. While many mock drafts predict that he will be selected in the 9-12 range, our PNSP model gives him a strikingly low rating of 47.3, making him the 42nd ranked player by PNSP in this year’s draft class. Our role probability model is a little more optimistic of Knox’s pro outlook, giving him a 46% chance of making it as a starter in the NBA (13th highest mark in this class). The role probability model also gives Knox a very high chance of coming off the bench at 32%. His All-Star probability is in line with his low PNSP projection at just 7%. Overall, Knox was a one-dimensional scorer in college and did not bring enough other tools to the table to suggest that he can fill up a stat sheet in the NBA. He may have enough skill as a scorer to serve a complementary starting role or provide scoring off the bench.

The list of players in Knox’s comparisons were mostly offensive-minded in college. Many of them were also sub-par defenders in college with a low block/steal percentage (Khris Middleton, Shabazz Muhamad, James Young, Von Wafer). Thaddeus Young and Khris Middleton both have turned into effective offensive players in the NBA, and while Middleton has become a very good shooter in the NBA, none of the others would be considered elite three-point shooters. 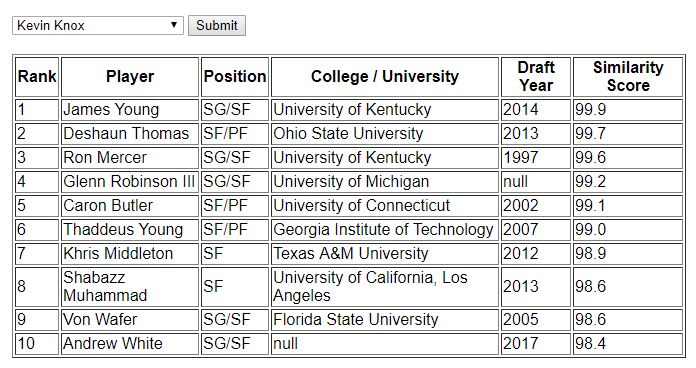 Knox was a good, not great, scorer at Kentucky. Most of his scoring came from mid-range and 3-pointers. According to hoop-math, 41% of his attempts came on two-point jump shots, 38% were on three-point attempts, and 21% were at the rim. Considering his size, it is a bit concerning that he did not get to the rim at a higher rate. This suggests that Knox was not very effective in taking advantage of his size to bully smaller players into the paint. It is also a bad sign that he was willing to settle for so many mid-range shots. How much of that is attributed to coaching / teammates vs. Knox’s decision making is tough to decipher… At any rate, these shots are poor in expected value and in today’s day are often the type of shot defenders want opposing players to settle for. It will be difficult for Knox, let alone any player, to be a highly efficient scorer if he continues to attempt a high number of mid-range jumpers. His jump shot looks smooth and fluid but he was inconsistent from 3-point range where he shot 34% on 167 attempts. Still, at the next level, our models project Knox to be an above average 3-point shooter and a slightly above average scorer as a SF/PF hybrid.

Playmaking was not one of Knox’s strengths. He averaged just 1.5 AST/G in his freshman season (8.7% assist rate). This is a very low number for any player that is his team’s main threat on offense. He also turned the ball over at a somewhat high rate with 2.3 TOV/G (14.1% turnover rate.). This equates to an ugly 0.62 assist to turnover ratio. Below is a list of former draft picks with similar usage, assist, and turnover percentages as Kevin Knox:

None of the players on this list have turned into effective offensive creators in the NBA; thus, unsurprisingly, our models project Knox to be below average playmaker.

On the other side of the court, Kevin Knox looks like a liability to his own team and someone that opposing offenses actively seek out to exploit. His steal percentage of 1.5% and block percentage of 1.0% are both alarmingly low. Obviously, Knox will never be asked to be a rim defender in the NBA, but he will be expected to at least challenge his opponent’s shot, and he hasn’t shown the ability to do that effectively. Our models indicate that he will be below average at generating blocks and steals for his position in the NBA. Another question for Knox will be whether he can switch on screens and defend players at other positions. Unfortunately, he doesn’t appear to have the quickness and foot speed to stay in front of smaller guards on the perimeter; therefore, Knox doesn’t look to be a good fit in defensive schemes that rely heavily on switching. Whatever team that selects Knox will likely have to hide him on defense by having him guard players that aren’t strong offensive threats.

The results of our draft models indicate that Kevin Knox is not a very promising prospect. However, it is worth noting that Knox is still very young (not yet 19) and his body/skills are still developing. Further, Kentucky did not run an efficient or spaced offense, and Knox’s individual role could look very different in the NBA. A team that drafts Knox high may be banking heavily on his future development. Although his jump shot is inconsistent, his form and relaxed stroke are promising. If he can improve his shot selection and work on creating offense for his teammates, he could become a complementary player who can provide a scoring boost when needed. The bottom line is Kevin Knox is a very one-dimensional player. He is able to score the basketball but there isn’t much else production that he can bring to the table. Thus, his ceiling as an NBA player is likely capped as a potential starter or a bench player who can provide scoring for a second unit.