Leading up to the 2018 NBA Draft on June 21st, we will be using our NBA Draft Models (PNSP Model, Role Probability Model, and Similarity Scores) to investigate this year’s top prospects. These Prospect Profiles look at which stats affect NBA projections, present unique data points from a player’s stats, and give relevant comparisons to current NBA players. You can find all of our Prospect Profiles here or through the header menu above (NBA –> NBA Draft –> Prospect Profiles). In today’s article, we look at Wendell Carter Jr.

The less heralded, but arguably more efficient Duke big man this past season, Wendell Carter Jr. sports a 7’4.5″ wingspan and fills up nearly every box score statistic. The versatile Center out of Atlanta ranked #7 in RSCI coming out of high school. Despite that ranking, Carter played second fiddle to Marvin Bagley III to start the season, but as the season went on, Carter started to establish himself as the more diverse player.

A good indicator of a big man’s defensive prowess is steal percentage. For statistical benchmarks, some of the best defensive centers in the NBA (i.e. Joel Embiid, Anthony Davis, Andre Drummond, Steven Adams, Cole Aldrich (JK, kind of), etc). had a steal percentage greater than 1.5% in their final season of college basketball. Further exploration below shows bigs with a college Defensive Box Plus Minus Greater than 7. Wendell Carter joins a nice collection of so-called modern day big men, namely, Anthony Davis, Karl-Anthony Towns, and Joel Embiid – although there does appear to be a gap between the ELITE NBA big men at roughly 10 DBPM. Nevertheless, given his statistical indicators, Carter appears to have potential on Defense:

Potential Defensive ability? Check. Despite some promising statistical indicators on defense, offense is really where Carter shines as a prospect. He shot 41.3% from 3 on 46 attempts, 70.2% at the rim (according to hoop-math), and 73.8% from the free throw line on a 52.7% free throw rate (which is roughly average for a big man). In addition to showcasing an ability to score efficiently at all 3 levels, Carter demonstrated promise in passing ability at a young age. Carter posted an assist % of 13.0; the list of drafted (or 2018 draft eligible) freshmen big men that posted assist % greater than 10 is limited:

At the end of the day, one can slice and dice data infinitely many ways and can often times slice it in a way that tells a story one wants, but the point here is that Carter showed significant contribution across all major statistical categories in a way that few freshmen bigs have.

The first player that comes to mind when comparing the slow-footed but diverse big man is Al Horford. Although, when observing Wendell Carter Jr’s top scored similar players by our Similarity Scoring metric, we find the likes of Noah Vonleh, Andrew Bogut, Kevin Love, and Karl-Anthony Towns to name a few. A collection of bigs with offensive diversity, rebounding, and varying defensive ability, while having different levels of success in the NBA. Nevertheless, we have further supported Carter’s playing style as a modern NBA center that few have successfully mastered. 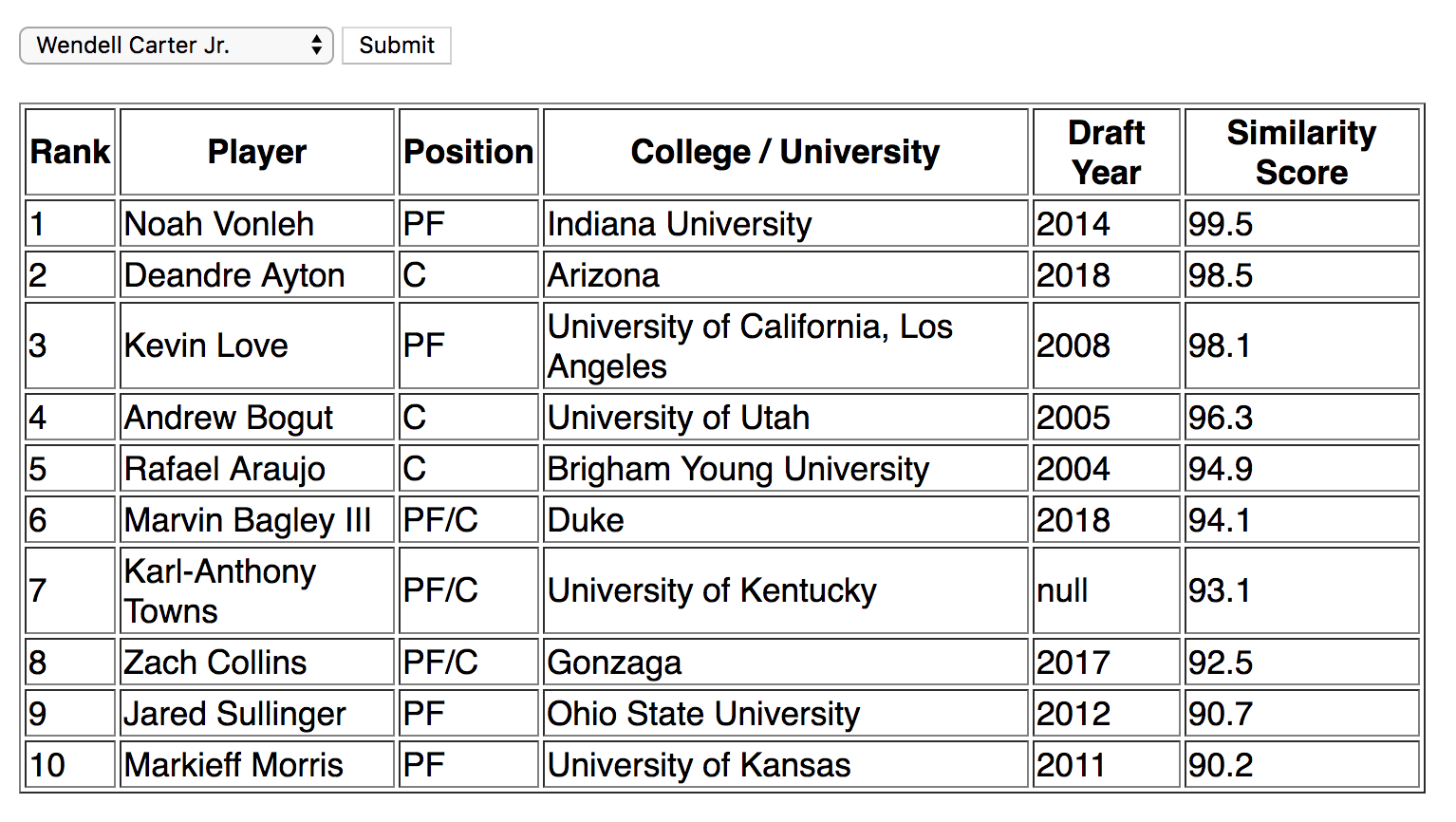 ***One reason that the Al Horford pairing likely fails to show up in our scoring system is the change in College Basketball. Al Horford attempted four threes in three seasons at Florida. If Horford’s college career occurred during the small ball era, I would imagine we would’ve seen a significantly larger number of three point attempts from the NBA All Star.

Carter grades out as the 4th highest player amongst 2018 NBA Draft prospects by PNSP with a score of 90.0. Remember, PNSP ranges from 0-100 with a roughly normal distribution, meaning Carter’s 90.0 rating is very good. Because PNSP is a scaled aggregate of box score statistics, we can determine how prospects, specifically Carter in this case, project in different statistical categories. Interestingly, but unsurprisingly, Carter gets to his 90.0 by projecting above average in most statistical categories with no elite projections in any one category at the center position.

Our NBA Role Probability Model gives Carter a 97% chance of making the NBA in some form. His most likely outcome is as a starter or sixth man in the NBA. These results appear to be inline with public consensus. While Carter’s Starter likelihood is roughly 50%, he still is given a 30% probability of being an All-Star. We saw statistical groupings that put Carter in the Towns, Embiid, and Davis breath, but the NBA Role probability model does not predict quite the same level of talent in Carter as the aforementioned All-Star big men.

Is Carter the next Horford? His one-year of college statistics certainly point in that direction; a modern NBA center that can contribute in many ways driven primarily by good awareness and high Basketball IQ. Based on his physical measurements and statistical production, Carter appears to be among the safest bets to make it in the NBA. Despite his high projection, there is still legitimate question about the positional value of a Center at Carter’s size, and whether or not that type of player will even see the floor at all in the NBA 5 years from now. Nevertheless, if Carter can prove to stay in front of perimeter players well enough, its difficult to envision many outcomes where Carter isn’t a viable NBA contributor.