With the 28th overall pick in the 2016 NBA Draft, the Sacramento Kings selected Skal Labissiere, who perfectly fit the bill of a modern-day NBA big man: nearly 7’0″ and roughly 215 lbs, armed with a 7’3″ wingspan and a smooth jumper. However, Labissiere’s production in his one season with Kentucky was extremely minimal. Though he was Draft Express’s preseason number 1 overall pick, he averaged just 6.6 points per game, 3.0 rebounds per game, and 1.6 blocks per game while playing a measly 15.8 minutes per game. Given this production, Labissiere seemingly didn’t warrant any draft pick at all. But not only was he drafted, he went in the first round. Why? Potential. The idea was that Labissiere could develop his tantalizing tools and become the all-star caliber player many thought he would be prior to his time at Kentucky. While that would have been a great outcome, it was still more likely that Skal would not reach that all-star potential at all. With the combination of this potential and an unproven track record, it seemed that Labissiere’s role in the NBA would be either be an all-star or a bench warmer—or maybe even out of the league! Contrast Labissiere with Frank Kaminsky, who earned the Wooden Award in his senior season at Wisconsin. Most did not envision Kaminsky as an all-star, but rather a 4th, 5th or 6th man in the NBA. He had more polish than Labissiere, but a lower ceiling. These two seven-footers had very different profiles coming out of college.

In order to capture the likelihood that players like Skal Labissiere become NBA all-stars and players like Frank Kaminsky become NBA starters, we have created an NBA Role Probability Model that seeks to predict what role an NBA prospect will play in the NBA. Adding this to our previous prospecting work, we now have three components to help evaluate NBA prospects:
(1) PNSP, which answers the question, “How valuable will a player be?”
(2) Similarity Scores, which tell us about playing style by comparison to similar players
(3) NBA role probability model, which answers, “what roles might this player fill in the NBA?”

For a glimpse of how the 2016 draft class scored on this model, check out NBA Role Probabilities for 2016 NBA Draftees here.

We started by sorting players into four NBA roles: All-star, Starter, Bench, and Non-NBA. NBA all-star status represents top-echelon players. NBA starters would include players that fill a complementary role, and some sixth men who are top contributors to their team (e.g. Jamaal Crawford). As a rough cutoff, both all-stars and starters tended to play at least 25 minutes per night. Bench players represent those playing deeper in the rotation. They played no more than 25 minutes a night, and in most cases under 20. Lastly, Non-NBA players are players that could not carve out a role in the NBA, normally playing fewer than three seasons (e.g. Ndudi Ebi).

Since there are so many elements that go into a player’s production, we categorized players by hand in order to account for the different situations faced by each player. For example, should Jay Williams be categorized as a bust? If he does not end his career tragically with a motorcycle accident, he likely goes on to become at least an NBA starter, so that’s what we’ve assigned him. The categorizations were made based on peak performance. For example, Vince Carter would be classified as an all-star, not a bench player (his current role with the Memphis Grizzles). The biggest gray areas are all-stars vs. starters and bench players vs. non-NBA players. For perspective, the table below shows an example of 10 players we have placed under each category. Note that players must have been drafted prior to 2015 in order to be categorized.

The table below is the NBA Role Probability Model’s out-of-sample predicted role probabilities for 10 prospects from the 2011 NBA Draft. Kyrie Irving had far and away the highest predicted probability of becoming an NBA all-star. The model also gave Kawhi Leonard a 37% probability of becoming an all-star, third in the 2011 draft; this is surprising given that Kawhi Leonard was drafted 15th overall. Additionally, the model gave MarShon Brooks a 13.6% of becoming an NBA All-Star but also 47.2% chance of not even making the NBA, eerily similar to the Skal Labissiere example. 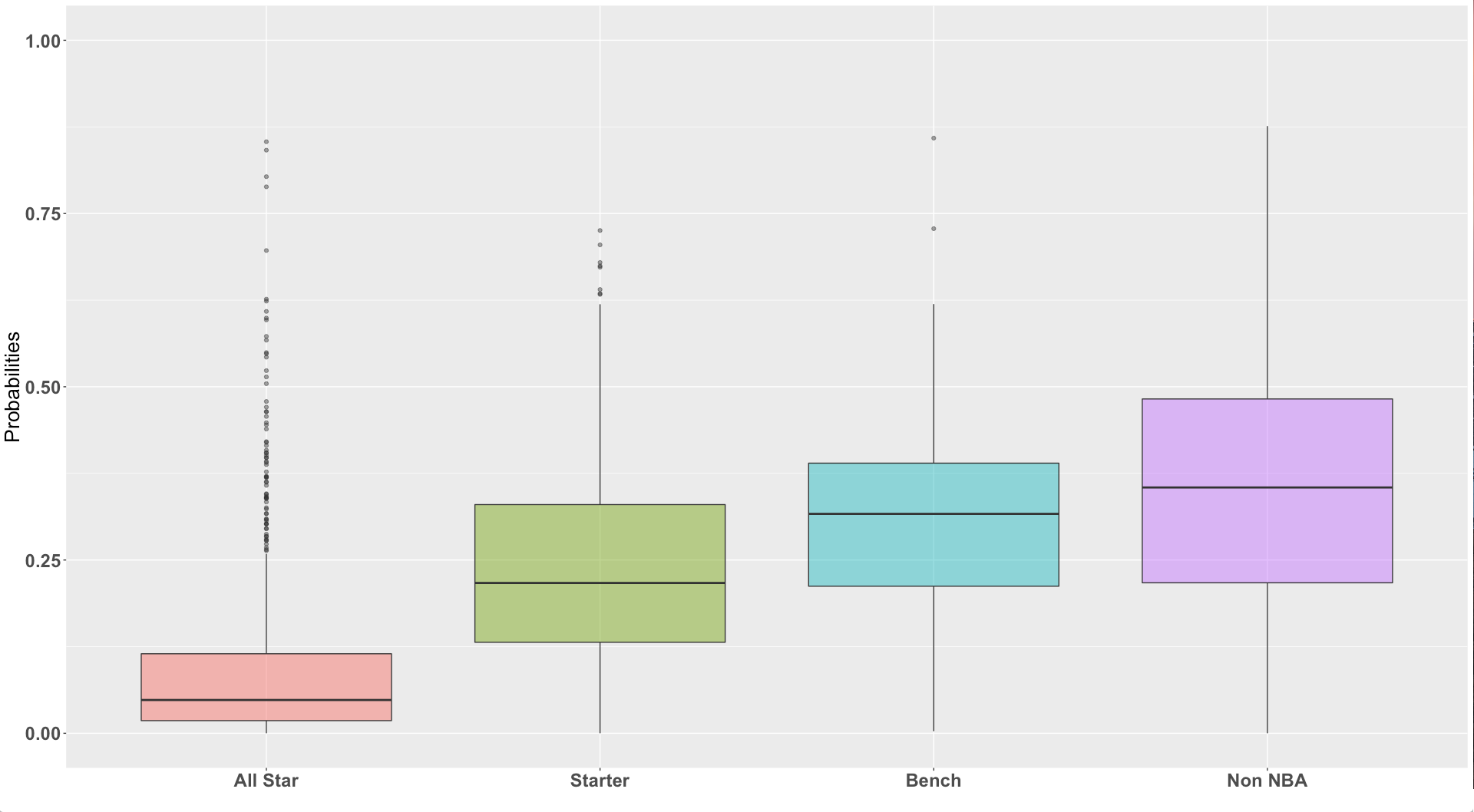 As another way of visualizing the out-of-sample predicted probabilities, the density plot below shows the distribution for each category. The shape and center of each distribution highlights the differences across different NBA roles. For instance, the All-star probability distribution is skewed right centered with a mean of 9.9%, so any probability greater than 0.25 would be considered a relatively high probability of becoming an All-star. 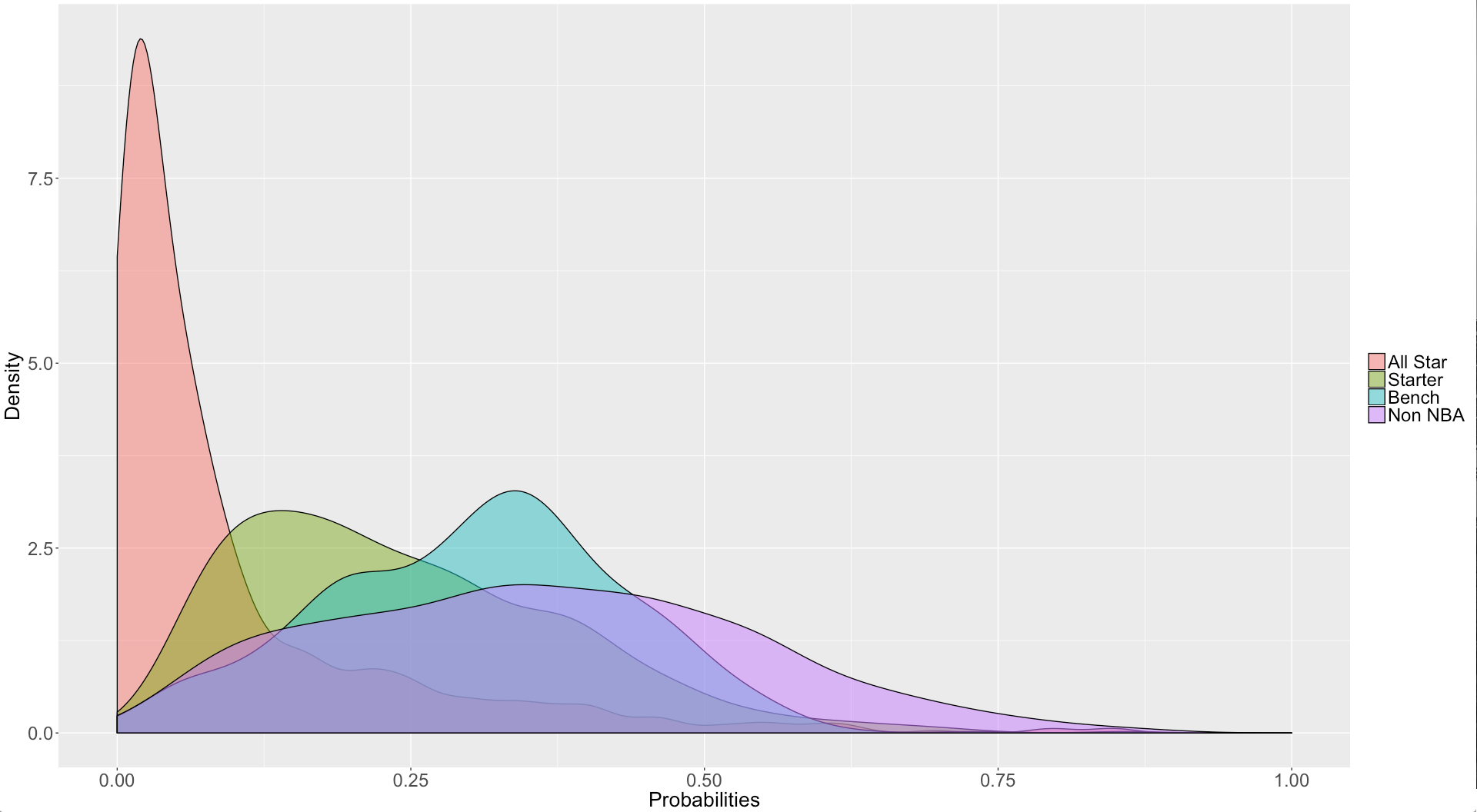 The NBA Role Probability model is a tool that complements our PNSP model and Similarity Scores to break down and project NBA prospects. As rosters are limited and lineup construction is of the utmost importance (especially in modern day NBA), our NBA Role Probability Model is built to help assess the upside (or downside) potential of a player, as well as how their role in the NBA would fit on a given team.

Oh, and turns out Skal Labbissiere had one of the lowest predicted all-star probabilities. Maybe he really wasn’t worth the first round pick?