The probabilities for our second round predictions were generated from a combination of models that are built on team and player level data from the regular season. Keep in mind that teams who had significant injuries in the regular season may be undervalued by the models. Likewise, teams who have players that played through the regular season but are injured for the playoffs are likely overvalued. For more information on our modeling techniques check out our methodologies page.

In round 1 our playoff model went 7/8 with the only miss being the New Orleans Pelicans upsetting the Portland Trailblazers. According to our model the Trailblazer’s run will very likely end in round 2 against the Golden State Warriors. The model also likes the Rockets Raptors and Celtics to advance to the Conference Finals. Obviously, the Kyrie Irving injury creates a disconnect between how the Celtics performed in the regular season vs. their outlook for the rest of the playoffs. I’m sure Brad Stevens will throw everything he has at the young Sixers team but without Irving I think it is likely that Philadelphia advances, despite what the model says.

Below are the results of 10,000 simulations of the 2018 playoffs from the 2nd round on, displaying the probability that each team advances to a given round: 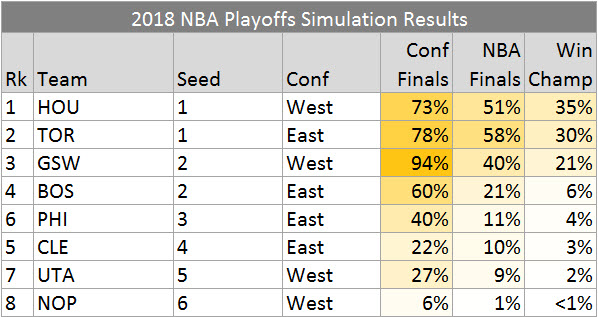