We’ve reached the last lock in the Twins rotation: Phil Hughes. Next week, we’ll start breaking down options for the fifth starter position.1 But before we get there, let’s break down Hughes’s game.

In 2014, his first full year with the Twins, Hughes looked like a potential ace. His 11.63 strikeout-to-walk ratio from the 2014 season was the highest in MLB history, making him look like a FIP superstar2 and rotation anchor. By comparison, though, his 2015 campaign was a disappointing one, with his strikeout rate dropping from 8 per nine innings to 5.4. In 2016, he only made it eleven starts in before getting injured. A return to something like his 2014 form could go a long way in shoring up the Twins’ shaky pitching staff.

It’s “almost all” rather than “all”, because Hughes has periodically toyed with a changeup. It’s never been a huge part of his arsenal, but he started to work it in a bit more often in the latter half of 2015. In his starts in 2016, he mostly abandoned it, but there are reports that he’s been working on it this spring. 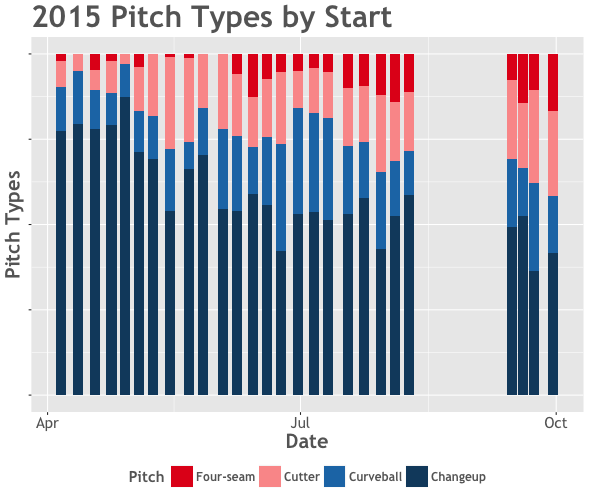 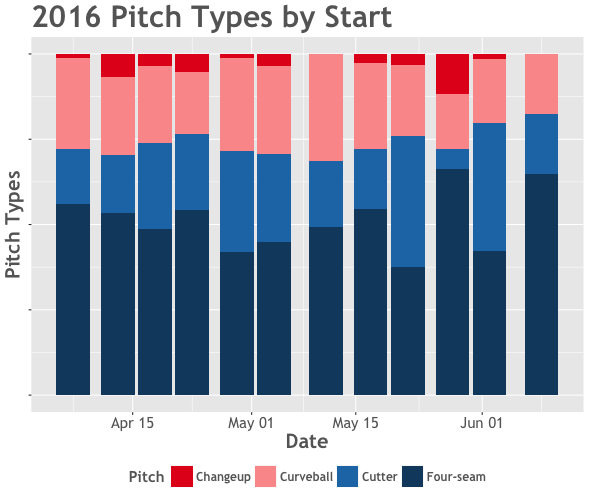 Hughes didn’t throw enough pitches in 2016 to make it into our PCPS Viewer. In order to have a sizeable dataset to work with, we’ll look at his pitches from 2015. Let’s take that as an opportunity to visualize pitch selection by count a little differently than the PCPS Viewer, in a way that will hopefully illustrate how to build from PCPS to a fuller understanding of a pitcher’s arsenal.

From PCPS to Perceptions

We’ll start by looking at his PCPS. In 2015, his PCPS was 0.061. Out of 152 qualified pitchers in 2016, that would place him in between the 97th and 98th. This score is relatively low, indicating that Hughes’s fastball percentage remains relatively constant regardless of count.

The plot below shows what’s going on behind the scenes of PCPS by showing the exact information PCPS “sees”. These raw fastball percentages by count explain his relatively low PCPS. His fastball percentage remains relatively similar in all counts—partly because he doesn’t throw offspeed all that much to begin with! He prefers to stick with his fastball and cut fastball, except later in counts when he’s ahead.

But there’s more to pitch mixing than PCPS captures, so why stop there? Let’s fold in another layer of complexity by breaking out Hughes’s four pitches. Here we see an interesting pattern completely missed by PCPS: Hughes relies on his cutter most often when he has two strikes on a batter. Perhaps he sees his cutter more as an out pitch, while his four-seamer is his bread-and-butter in all counts. 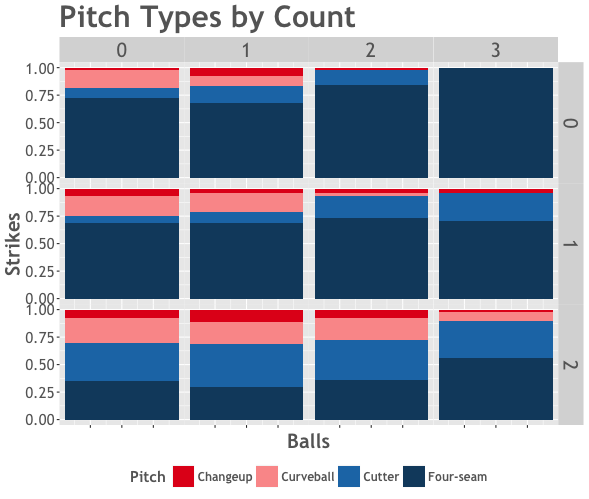 To really suss this out, we need to go one step further. Pitchers usually don’t throw the same types of pitches to lefties and righties, so let’s look to the chart below to see if Hughes has any patterns based on handedness. As it turns out, this sheds even more light on Hughes’s use of his cutter. For lefties, the pattern is as we saw before: he throws it in two-strike counts as an out pitch. But for righties, he uses his cutter as an all-purpose pitch in any count. (Note: pitches to right-handed hitters are the bars on the right, and lefties are on the left.) 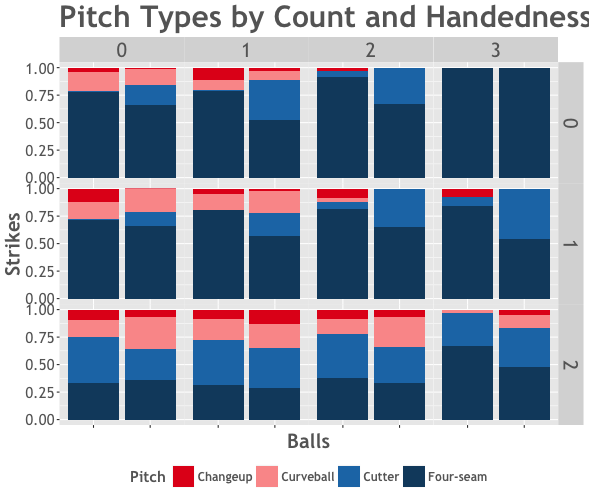 Cut to the Chase

One more interesting note about his cutter: when throwing it to a left-handed hitter (and therefore, we can assume, with two strikes), Hughes throws it to his arm side. Perhaps this is an attempt to catch the hitter looking at a pitch that breaks back to catch the outside part of the plate. (All plots are from the catcher’s perspective.) 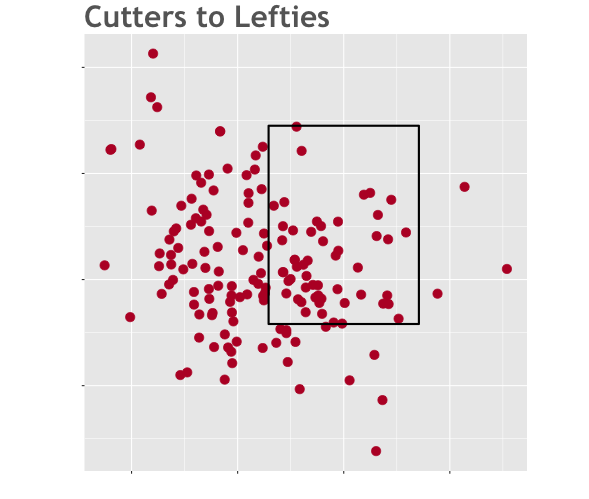 When he throws his cutter to a right-handed hitter with two strikes, he also goes arm-side. With fewer than two strikes, though, Hughes has a strong tendency to throw his cutter to his glove side, outside to righties, tailing down and away from their swing. 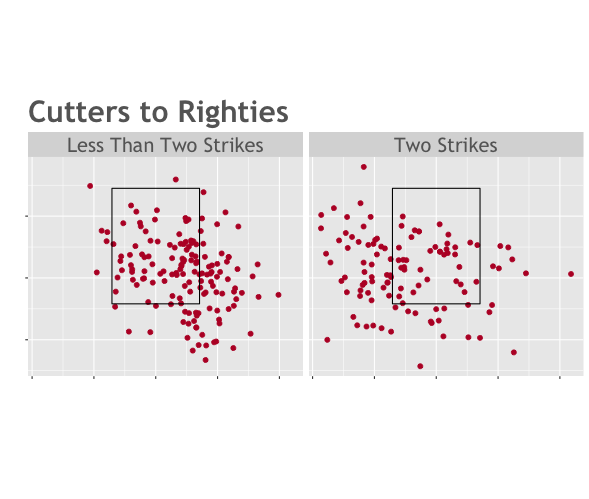 Let’s end by taking a quick look at how Hughes finishes off hitters. The plot below shows all pitches in 0-2 or 1-2 counts, broken out by pitch type and hand. Roughly: when he’s ahead, Hughes throws fastballs up and away, cutters arm-side, curveballs low and away, and changeups low and arm-side. 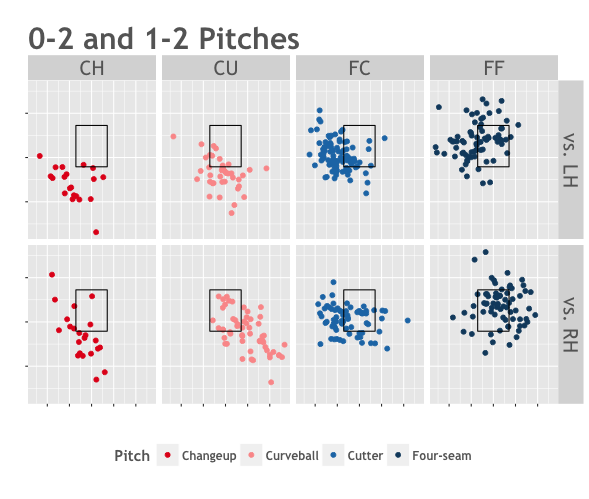 As a hitter, Hughes doesn’t give you many patterns to pick up on, as he mixes his pitches pretty evenly. Hitters can expect a few more curveballs—and cutters, if you’re a lefty—when he’s ahead. His changeup is a wildcard, but it’s hard to expect too much from it this season when it’s played only a minor role in previous years. The key for Hughes will be command. If he gets his strikeout rate back near his 2014 levels, he should be in good shape.