Leading up to the 2018 NBA Draft on June 21st, we will be using our NBA Draft Models (PNSP Model, Role Probability Model, and Similarity Scores) to investigate this year’s top prospects. These Prospect Profiles look at which stats affect NBA projections, present unique data points from a player’s stats, and give relevant comparisons to current NBA players. You can find all of our Prospect Profiles here or through the header menu above (NBA –> NBA Draft –> Prospect Profiles). In today’s article, we look at Kevin Huerter.

Our PNSP model rates former Maryland standout Kevin Huerter at 50.6, which is the 24th highest mark in this draft class, and the 5th highest mark among shooting guards. Our role probability model likes his chances as a future starter (35%) or bench player (40%). The most promising aspect of Huerter’s projection is his low non-NBA probability at just 14.4%. This is the 15th lowest in this draft class, and it suggests that Huerter is very likely to contribute in some fashion as an NBA player. Kevin Huerter’s All-Star potential is lower (11%), but this is what we would expect from a player who is likely to be selected at the mid/late 1st round.

Huerter was a good outside shooter at Maryland. He shot 39% on 350 total three-point attempts over his two-year college career. In just his sophomore season, his accuracy reached 41.7% which put him 64th out of 506 players with at least 150 attempts in 2018. He also shot 40% from NBA three-point range according to Will Schreefer. At 6’7″ Huerter also has good height that will help him continue to get shots off over NBA defenders. Our models project him to be a very good three-point shooter as an NBA guard. Huerter shot 75% from the line at Maryland, which is a solid percentage but not elite. Interestingly, our models project Huerter to be a slightly below average free throw shooter at his position in the NBA.

Outside of three-point shooting, the models don’t expect Huerter to add much else in terms of scoring. He did not get to the rim or draw very many fouls in college. According to hoop-math, he took 21% of his shots at the rim, and half of them were assisted. This indicates that he will not be very good at driving and finishing at the rim in the NBA. He also shot just 127 total free throws in two seasons at Maryland. The models project Huerter to be below average at his position in scoring from mid-range, at the rim, and in free throw attempts.

Huerter wasn’t necessarily an elite college defender but he was a positive contributor on that end of the floor in college. His DBPM of 2.3 in his sophomore season ranked 56 out of 426 guards with at least 1000 minutes played (87th percentile). He produced blocks and steals at just a modest rate in college (2.1% BLK percentage, 1.1% STL percentage), and our models project him to be below average in both steals and blocks in the NBA. Huerter possesses the height to be a switchable defender but he is still alarmingly thin at just 194 lbs. There is no doubt that Huerter will need to add significant weight in order for him to keep bigger guards and wings from bullying their way to the basket.

Most players have numerous comparisons with a similarity score in the 98-100 range, but no one in Huerter’s list tops 97. This suggests that Huerter’s profile is rather unique. Almost all of his similar players were good three-point shooters in college. It’s surprising that Tony Allen compares closely with Huerter. Allen is notorious for being an excellent defender but a poor shooter in the NBA. 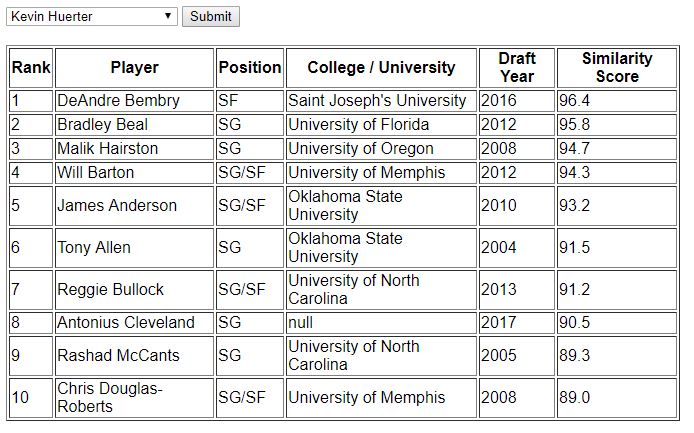 For a player that is expected to get picked towards the end of the first round, our models like Huerter’s potential to become a starter or bench player in the NBA. His strongest trait in the NBA is projected to be his three-point shooting which is an increasingly important skill. He has good height for a shooting guard (6’7″), which will allow him to get shots off in less space and will make him more difficult to defend. Huerter’s defensive ability is still somewhat of an unknown. His defense was solid in college but he desperately needs to add more weight to hold his own on NBA players. Our models project Huerter to be slightly below average in steals and blocks for his position, but steals and blocks are not always a perfect indicator of perimeter defense. If he can become an average defender who can switch on to multiple positions on the perimeter, and continue to be an effective shooter like he was in college, then he will find a spot in an NBA rotation.