This week, we continue our series on the Twins starting staff by taking a look at Kyle Gibson. For the series introduction and the first installment on Ervin Santana, look here.

In 2016, Gibson’s PCPS was 0.098, placing him 39th out of 152 qualified pitchers. This score is on the higher end, meaning Gibson throws offspeed pitches a lot more in some counts than others. The chart below breaks it down: 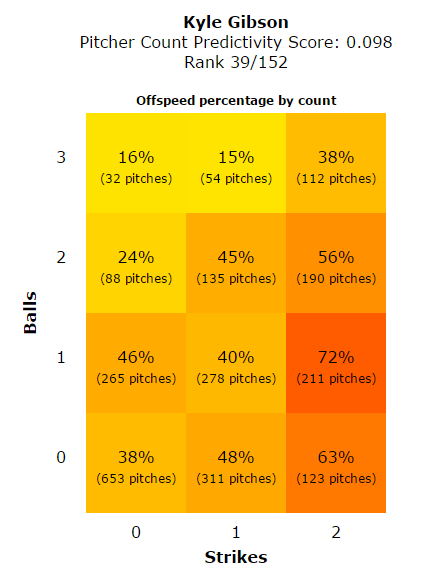 Gibson’s higher PCPS makes him similar to Ervin Santana, who we profiled last week. But Santana only throws three pitches, so his PCPS and offspeed percentages by count do a pretty good job at capturing his mixing approach. Pitchers like Gibson, with multiple types of fastball and many offspeed pitches, can mix their pitches in ways these tools can’t capture. PCPS measures mixing between the two broad pitch categories: fastballs and offspeed pitches. But for many pitchers, including Gibson, a lot of important mixing happens within these categories as well. Finding these patterns means digging a little bit deeper into the numbers for fastballs and offspeed separately.

Gibson will throw either fastball in any count, but he favors his two-seam fastball when he’s behind in the count and his four-seam otherwise.

This tendency could indicate a different use for each pitch; his four-seam fastball is for working ahead in counts and striking batters out, while his two-seamer is for inducing weak contact (a function more important when a strikeout is less likely).

His fastball locations vary by count too. He mostly likes to work inside when he’s ahead, throwing fastballs up-and-in to lefties and down-and-in to right-handers. 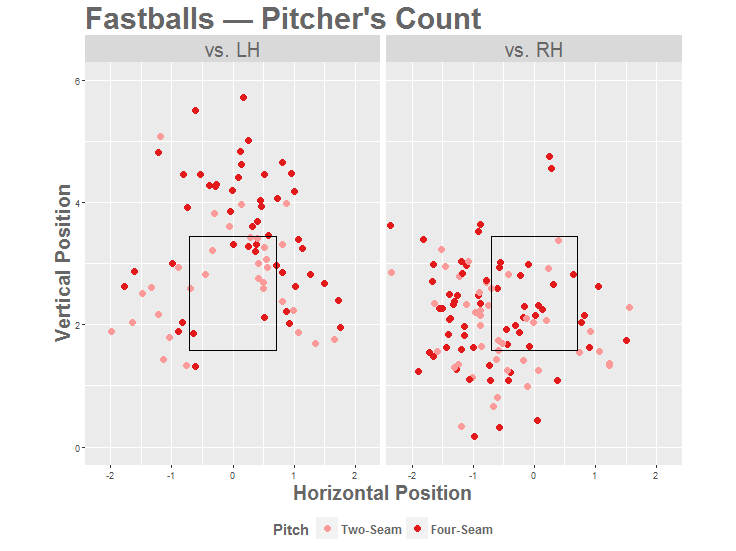 When he’s behind, throws more two-seamers to his arm side, especially when they tail low-and-away from lefties. 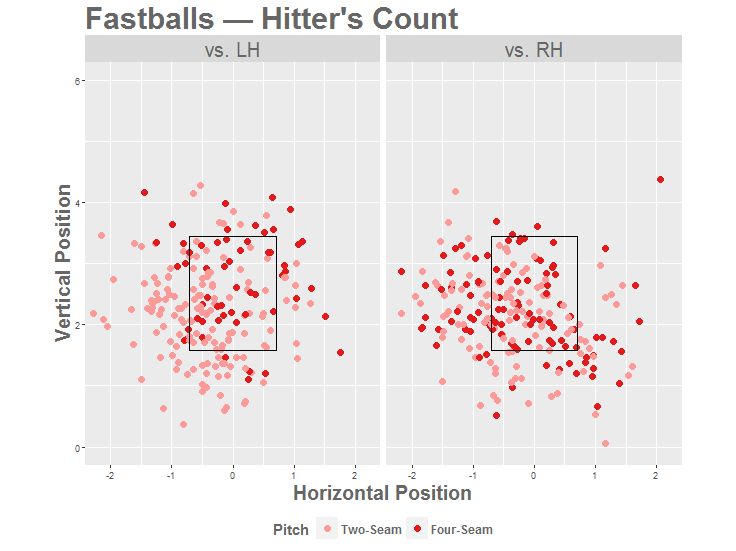 As stated earlier, Gibson throws offspeed pitches especially frequently when he’s in three favorable counts: 0-2, 1-2, and 2-2. As it turns out, not only does he throw more offspeed in these counts, but he also uses his offspeed differently.

When he’s not in any of those three counts, Gibson prefers to throw pitches that break away from hitters. He favors sliders to right-handed hitters and changeups to lefties, mixing in his curveball sparingly to each. To a lefty, Gibson throws 22% changeups, 11% curveballs, and 5% sliders. Right-handers see 21% sliders, 12% curveballs, and 8% changeups.

Once he gets ahead, though, begins to favor the slider, regardless of handedness. His offspeed profile in these three counts is about 30% slider, 20% changeup, and 10% curveball.

Why the disparity? Without reading Gibson’s mind, here’s a guess: in normal (non-two-strike counts), a pitcher’s focus is on throwing strikes to get ahead. The safe way to do that is to throw pitches that break away from a hitter, rather than ones that tail into their swing. Once the count reaches two strikes, though, it’s less important to throw strikes and more important to offer up your nastiest stuff to put hitters away. Gibson’s slider is fast and has a lot of break, and with no need to leave it in the zone, it’s a safer option to hitters of either handedness.

A final note on Gibson’s offspeed: as a ground ball pitcher, he keeps it low in the zone. This is especially true with two strikes, where he uses low offspeed as a foil to fastballs up and out of the zone. 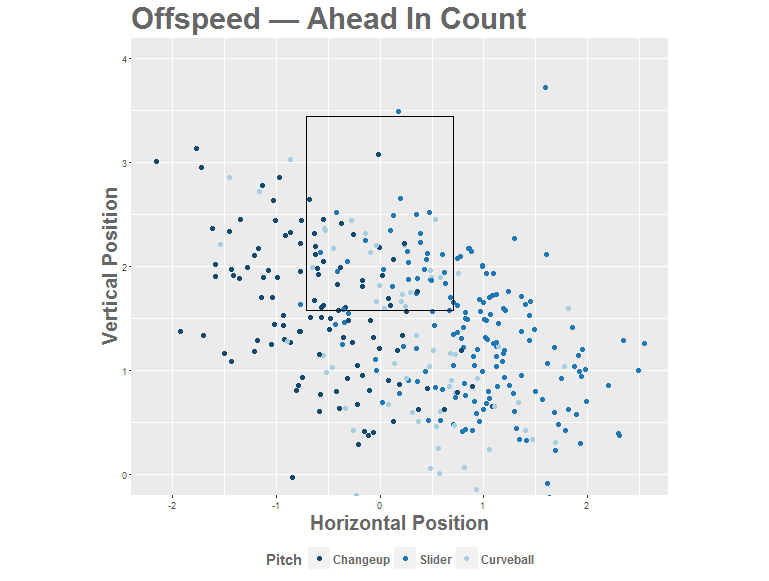 As his high PCPS indicates, there are lots of patterns to be found in Kyle Gibson’s selection. In fact, there are more patterns in his pitching than his PCPS would indicate, given his wide arsenal of pitches. When you’re watching a Gibson start this year, keep an eye on how he mixes his three different offspeed pitches and whether his fastball movement is keeping hitters from barrelling his pitches up.