Leading up to the 2018 NBA Draft on June 21st, we will be using our NBA Draft Models (PNSP Model, Role Probability Model, and Similarity Scores) to investigate this year’s top prospects. These Prospect Profiles look at which stats affect NBA projections, present unique data points from a player’s stats, and give relevant comparisons to current NBA players. You can find all of our Prospect Profiles here or through the header menu above (NBA –> NBA Draft –> Prospect Profiles). In today’s article, we look at Lonnie Walker IV.

Walker ranks as one of the lower combo guards in the 2018 draft with a PNSP score of 37.1. Additionally, Walker ranks 9th in most likely to not make it in the NBA at 50.6%. Players that ranked with a PNSP less than 40 and a non-NBA probability greater than 50% include “busts” Archie Goodwin, Rashad Vaughn, Marcus Paige, Malcolm Lee, but also NBA contributors Tim Hardaway Jr., Langston Galloway, and Avery Bradley. Aside from Bradley, the latter list was older when they entered the draft and consequently penalized for their age more than the former group of which Walker aligns closer with.

In terms of projecting Walker’s areas of contribution, by our PNSP model, he projects as a below-average / average contributor in rebounding, play-making, scoring, and shooting as an NBA guard. Notably, his mean projected outcome is as a slightly above average 3 point shooter. Another positive is that he doesn’t really project extremely poorly in any specific category.

Walker’s top player comps by our similarity score tool are somewhat of a mixed bag in regard to their style of play. Not many of these players are effective offensive initiators, even as secondary ball handlers. Few of these players are considered good 3-point shooters (or at least not yet). Ultimately, it’s rather difficult to conclude what these list of comparables tells us about Walker, but the initial investigation doesn’t look promising. 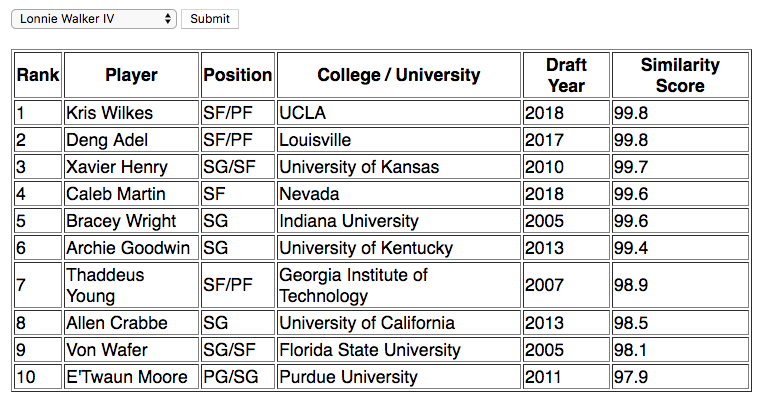 Despite poor college production, Lonnie Walker IV projects to go somewhere in the mid-first round and potentially as early as the late-lottery. Most people in the public sphere reference his potential as a reason for drafting him this high. Potential appears to be coming from the combination of youth (age 19.3), RSCI ranking (16), physical stature (6’4″ with 6’10” wingspan) and flashes of high-level production seen in a few individual game performances. Historically speaking, these types of players have more often played a limited role or failed to stick in the NBA rather than actually becoming good NBA players. This is another reason that explains why our modes are so low on Mr. Walker.

Lonnie Walker IV produced low volume statistics at a fairly inefficient rate in his lone college basketball season. Consequently, our models project him as having a low probability of becoming an NBA contributor and give him limited upside. Certainly, there are other variables to consider such as college team context, coming back from injury, fluidity of shooting stroke, etc. that our models might not fully capture. And if one can prove that one of these is a significant predictor of NBA success, then you may be able to draw a more positive distribution of outcomes. Until that point, based on our models and statistical indicators, it appears that Walker is likely to disappoint more often than not at his current projected draft position.