Every year in the barren wasteland of the NFL offseason, pre-season win totals are set by oddsmakers for each team, serving as a rough expectation for how many games a given team will win in the coming season (e.g., the New England Patriots currently have a win total of 11 for 2018). I took a look at how coaches have performed against those pre-season expectations, with the idea being that a “successful” season is one in which they exceeded their expected wins. As an example, the 2017 Los Angeles Rams had a pre-season win total of 6, but ended up winning 11 games, so that gives a +5 mark for 1st-year head coach Sean McVay. For coaches with multiple seasons under their belt, we can do that calculation for every season and roll-up the results to give a view of how a given coach has performed against expectations over a long period of time.

Using data from Pro Football Reference and Sports Odds History, I gathered pre-season win totals and regular season results from NFL teams going back to 2001. For active NFL coaches, I looked at how many years they have exceeded their win total (and by how many games), strength of schedule, point differential, and how often they made the playoffs. I only included seasons in which they were the head coach of their current team (e.g., I am not including Andy Reid‘s years in Philadelphia). For new head coaches Jon Gruden and Pat Shurmur, I used their previous head coaching stints in Tampa Bay and Cleveland, respectively (marked with a *). Arizona, Tennessee, Detroit, Indianapolis, and Chicago all have first-time head coaches in 2018, so I used the departing coaches for those teams. Finally, note that there are plenty of coaches who have only 1 or 2 seasons, so don’t proclaim McVay or Marrone the next Belichick just yet! This analysis is more relevant for coaches that have a larger sample to draw from. 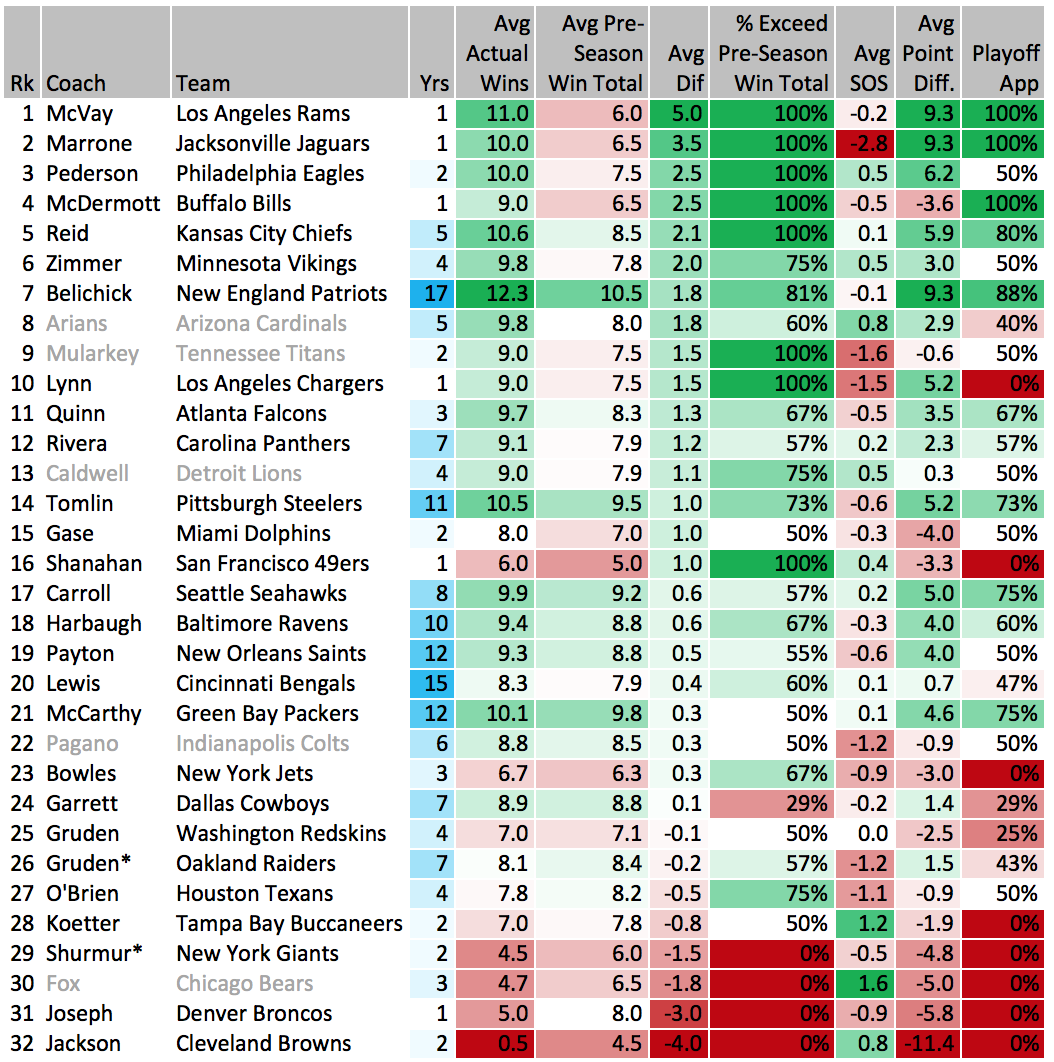 Results | Coaches with 4+ Years of Experience 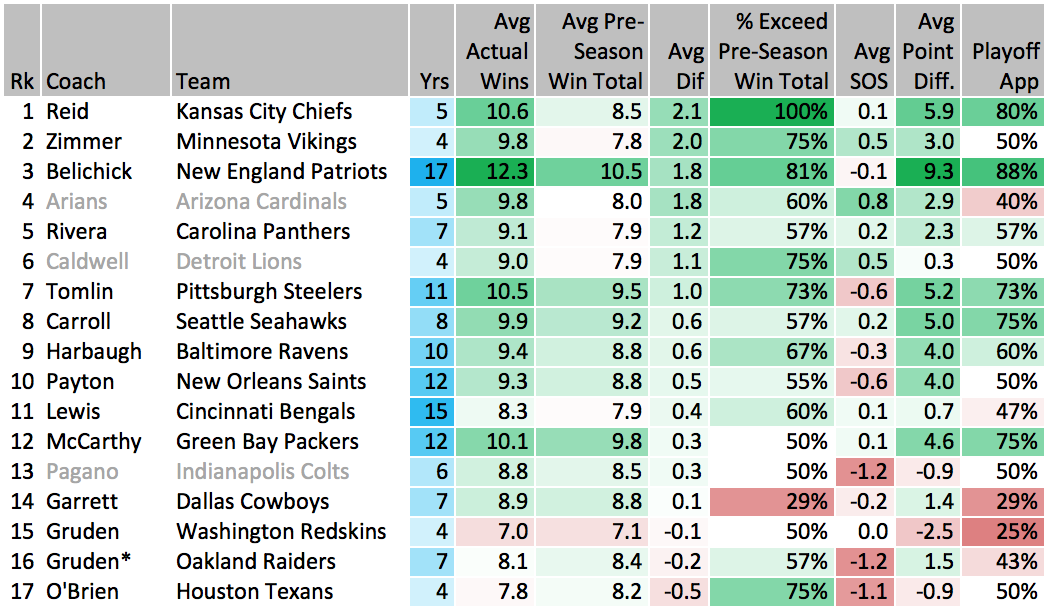 This analysis further validates the constant praise that Belichick receives, in case anyone was having second thoughts. His teams have exceeded their win total 81% of the time, despite having the highest expectations in the league (avg pre-season win total of 10.5). His teams also made the playoffs 88% of the time and had by far the best point differential among other experienced coaches. Note that Belichick’s 2000 season is not included in this analysis.

Andy Reid does not receive anywhere near the praise that Belichick does, but he has exceeded his pre-season win total every year in Kansas City, by an average of 2.1 games. Reid’s teams also have more wins and better point differential than Tomlin’s Steelers, Carroll’s Seahawks, Payton’s Saints, and Harbaugh’s Ravens. Maybe it’s time we show that man some respect.

On the negative side, Jason Garrett‘s Cowboys have only exceeded their win total in 2 of 7 seasons, matching their 2 playoff appearances in the same span. Jay Gruden has only made the playoffs in 1 of 4 seasons and has the worst point differential among experienced coaches. Jay’s brother Jon only made the playoffs in 3 of 7 seasons in Tampa Bay, averaged 8.1 wins, and actually had a -1.2 point differential in his 7 years as captain of the pirate ship. You might be surprised by those marks based on how heavily Gruden has been recruited by NFL teams during his time away from the game.

Team Win Totals for the 2018 Season