Injuries are inevitable in a game as physical as NFL football. Every season, numerous star players and important contributors are sidelined, leaving their fans and fantasy owners disappointed. Injuries appear to strike at random; an elite athlete can have his knee blown out in one cut like Dalvin Cook last season. However, is there a way to identify if certain players are more injury prone than others? I dug into the data to find out how well we can predict injuries among skill position players in the NFL.

First, I pulled together a data set of season-level data for all running backs, wide receivers, and quarterbacks since 2009 from Pro-Football Reference. I then gathered data from weekly injury reports for all weeks since 2009. I had to build an estimation of games missed for each player based on whether they were listed as questionable, doubtful, or out. For “questionable” I gave a value of 0.5 games missed (assuming questionable players play 50% of the time), “doubtful” was 0.75, and “out” and “IR” was obviously 1.0. I then aggregated these values to get season totals for each player. Players that were placed on IR before the season started were excluded from the data. Finally, I joined the player data for a given year with each player’s injury data for the following season.

Using statistics from the prior season along with player characteristics like height, weight, and age, I fit two models for each position group to predict player injury risk. First, I used a logistic model to predict the probability of a player missing four or more games. This is a simple way to gauge a player’s overall injury risk. Modeling the actual number of missed games was more challenging because many players miss zero games while some miss 2-4 and some miss 10+. Eventually, I landed on a regression model that utilized a zero-inflated Poisson distribution. This technique accounted for the surplus of players who miss zero games in a season.

Modeling an outcome that is as unpredictable and volatile as NFL injuries is very difficult. While the models might be able to identify which types of players tend to get injured more frequently, predicting the actual number of games that a player will miss in a given season is less reliable. Below are plots depicting the predicted number of games missed vs. the actual games missed for quarterbacks, running backs, and wide receivers since 2013. The quarterback position has the strongest correlation between predicted and actual games missed (R^2 = 0.023). However, this is still a rather weak relationship. Wide Receivers have been the most difficult to model, which makes sense as they touch the ball less frequently and thus there is more randomness in the injuries they experience. 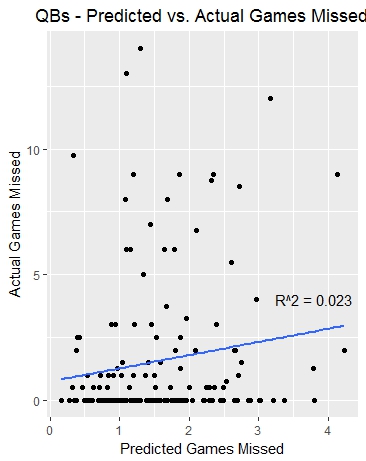 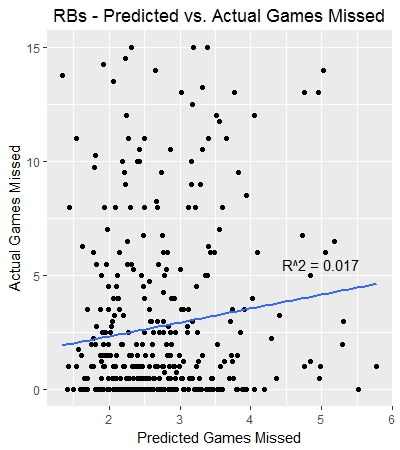 Modeling injuries in the NFL is tough and our modeled results for the 2018 season should be viewed with some skepticism. Perhaps it is most reasonable to use them to look at a player relative to other players at the same position, rather than locking in on a single player’s predicted values. That being said, there are some interesting takeaways that this analysis has brought to light: