FOOTBALL IS FINALLY BACK! And since there is such a shortage of Fantasy Football content out there, we thought we needed to give the people some material to prepare for their drafts. The following rankings are loosely based on model predictions for each position, which use historical player/team data to predict fantasy points for the coming season (i.e., separate models for QB, RB, WR, TE, K, DST). That said, there are plenty of factors that any model will have trouble capturing perfectly (injury status, team depth charts, suspensions, QB/Coach changes, etc.), and thus we have made some subjective adjustments to the rankings where necessary. For example, if a model weighs last year’s cumulative statistics too heavily, Odell Beckham Jr. is not going to come out very high since he only played 4 games. Our rankings can be found below, along with a short description of the model we used for each position. All rankings reflect PPR scoring.

Running Backs – our RB model uses a similarity score method. For each player, it finds past RBs with similar historical point totals, then uses their outcomes to predict that player’s points for 2018, while adjusting for player age.

Wide Receivers – this is a composite model built on a combination of prior year, two years ago, and career average statistics. The best predictors of future fantasy points at the WR position are yards, career fantasy points, age, and market share. Surprisingly, prior year yards are just as predictive as prior year fantasy points.

Quarterbacks – we use a simple regression-based model that incorporates individual Quarterback statistics and team-level variables such as margin of victory and wins, with an interaction between the two. Given the simple model methodology, front end adjustments are made to individual Quarterback statistics in cases where they have not played enough games, switched teams/coaches, or are returning from injury.

Tight Ends – our TE model is built on a combination of receptions plus targets, receiving yards, and snap counts. While adjusting for age, our TE model also makes use of each player’s highest scoring games, subject to a minimum and maximum amount of games played.

Team Defenses – defensive fantasy scoring is especially difficult to predict, mainly because the scoring isn’t driven by yardage, but, rather, by turnovers and sacks, which are less predictable. We found that using data from the prior 3 seasons is more predictive than using just last year. The most predictive stats were fantasy points (last 3 years), passing yards allowed (last 3 years), and this year’s Vegas win total. 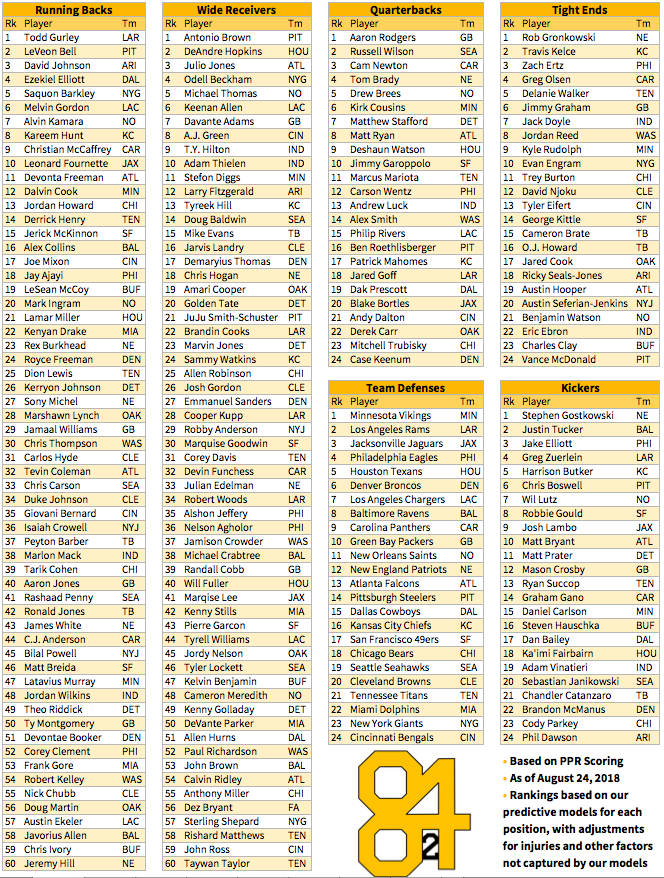