In this week’s installment of My Model Monday, I take a shot at quantifying home-field advantage for NFL teams and unpacking exactly what goes into that advantage.

If you pay any attention to NFL betting markets, you probably can’t walk out your front door without hearing “home-field is worth 3 points.” Any football fan can tell you that their team is more likely to win at home, and, in football, the data certainly supports that narrative. Since 2011, NFL home teams won 57.5% of games, winning by an average of 2.6 points (and a median of 3 points). Those numbers, over a large enough sample, are a significant bump above the 50.0% win rate (and 0.0 margin of victory) you would expect if home-field were worthless. And, as you know, you can’t win a game by 2.6 points in the NFL, so 3 makes sense as a more logical number. 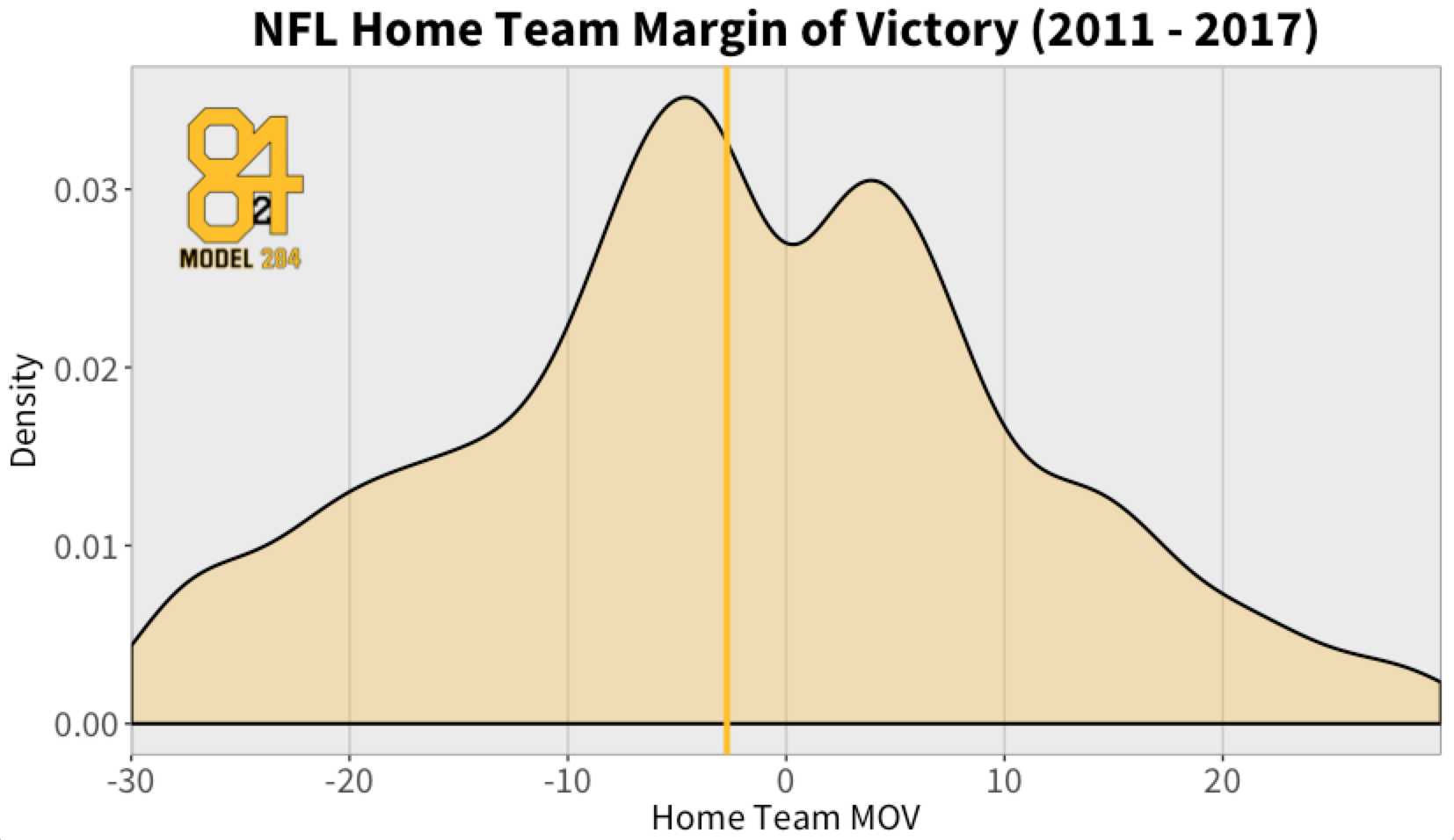 So, where does that extra ~3 point advantage come from? Is it from the home team being more comfortable? The away team being less comfortable? Crowd noise? Weather? Travel distance? It is probably some combination of those factors, and it likely varies from team-to-team. Unfortunately, many of those factors are difficult to analyze through numbers alone. In this article, I previously looked at some of them in detail, but here are a few highlights as they relate to home-field advantage:

Now, anyone who watched an L.A. Rams game this year can tell you that not all home fields are created equal. Assuming that a team like the Rams (who just moved cities and play in a stadium that is dominated by opposing fans) have the same home-field advantage as the Seahawks would be insane… To verify that I’m not insane, let’s break things up by team and see how the numbers shake out. 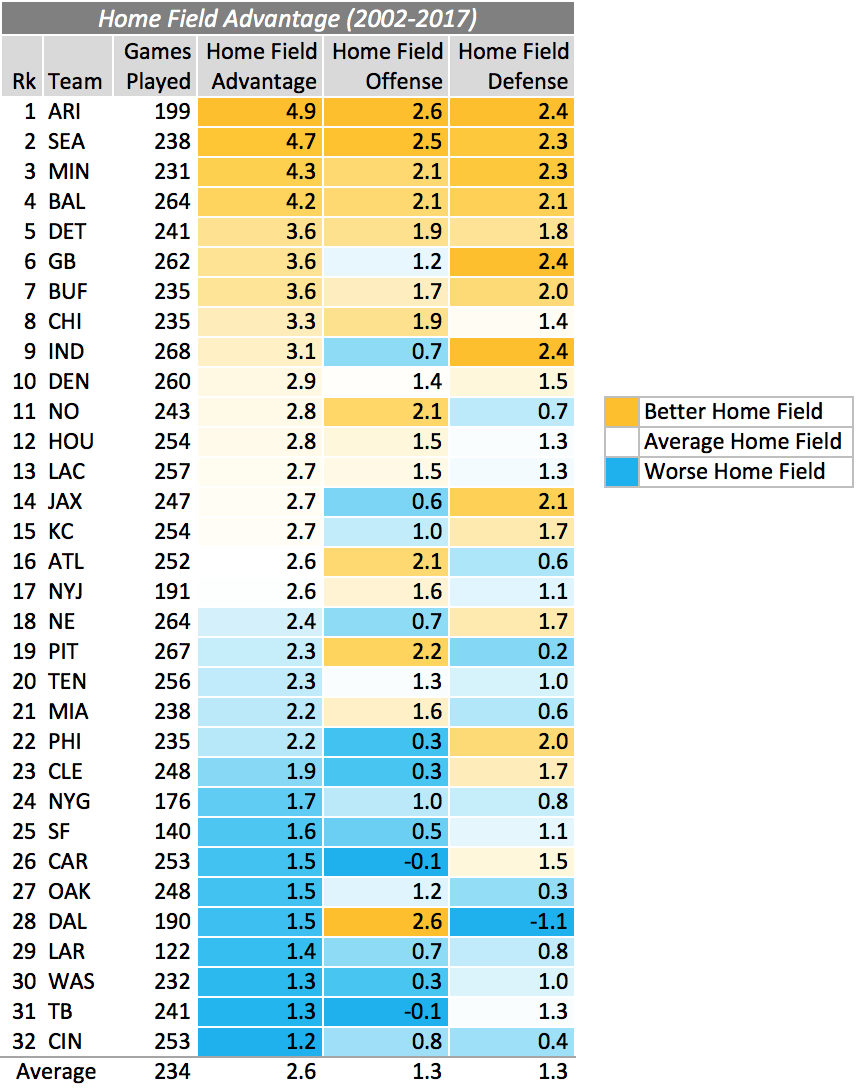 The constant revolving door of coaches, management, and players in the NFL means that teams often see drastic changes from year-to-year, so it isn’t always ideal to group this many seasons together. At the same time, if we use only a single season of games, that would be a very small sample to draw conclusions from (a common issue when working with NFL game data). Below, we do the same exercise as outlined above, but narrow down to the past five years (2013-2017), again removing neutral-site games and games at temporary stadiums: 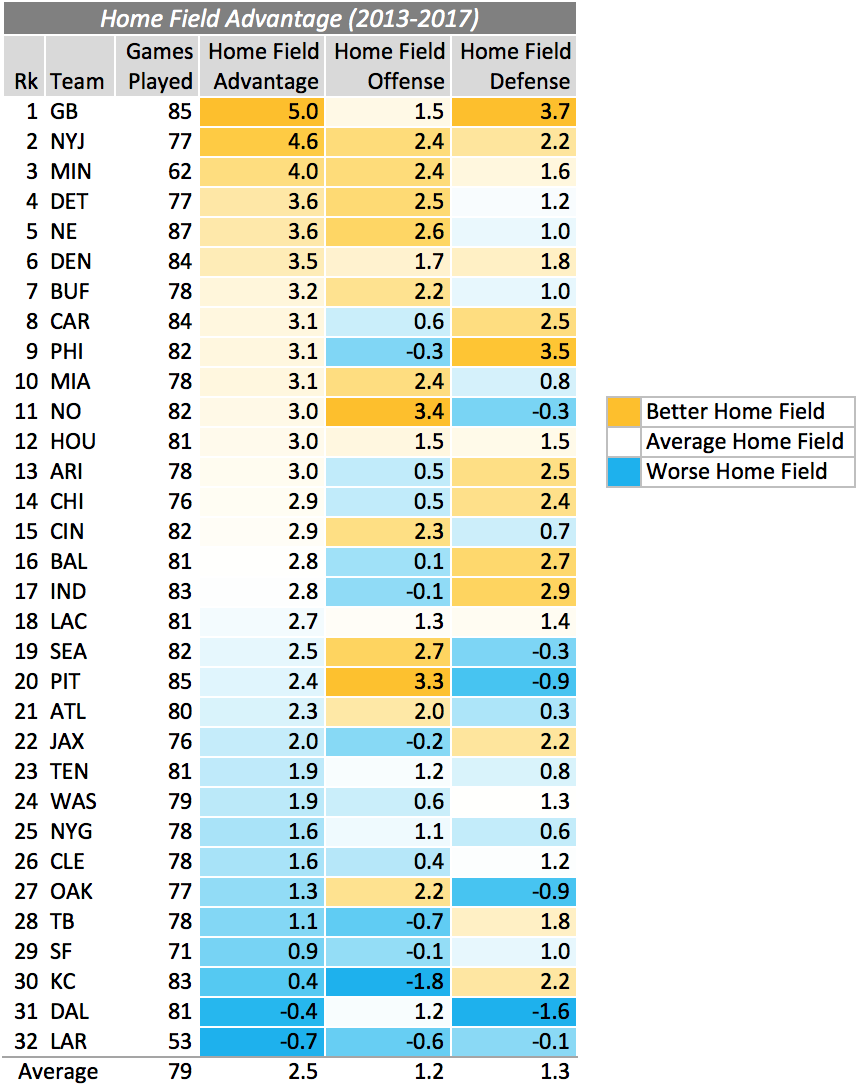 As you can see, there is quite a bit of variation from team-to-team, from a couple teams actually being better on the road in recent years (Cowboys and Rams), all the way up to the Packers, who are 5 points better at home. There is also quite a bit of variation between offense and defense, with some teams having their advantage driven by a stout defense, and others from a high-flying home offense. These numbers are not perfect, as I already highlighted a few issues with them, but they do provide some useful takeaways, especially for teams that have been consistent over the years in terms of QB, coach, management, personnel, stadium, city, etc.