Continuing our analysis of 2019 NHL Draft Prospects, this article looks at Scouting Reports and tweets on 2019 NHL Draft eligible prospects. In hopes of capturing some additional information outside of the numbers as seen by the “public” scouts. If you follow our NBA Draft content, you are already familiar with our sentiment analysis on 2019 NBA Draft Prospects. For those that are unaware, sentiment is a form of NLP (Natural Language Processing) or more formally defined as “the process of computationally identifying and categorizing opinions expressed in a piece of text, especially in order to determine whether the writer’s attitude towards a particular topic, product, etc., is positive, negative, or neutral.” Using Professor Bing Liu’s graded sentiment dictionary, we can analyze text to and identify who is more positively written about. For more information, please read our My Model Monday series article.

Sentiment is simply the number of positive words less the number of negative words. Below are the overall results for this year’s prospects that had over 250 applicable words written on them:

Not surprising to see Kakko and Hughes among the top. Although that could simply be a factor of the number of words written on them.

Players with the most words written on them: 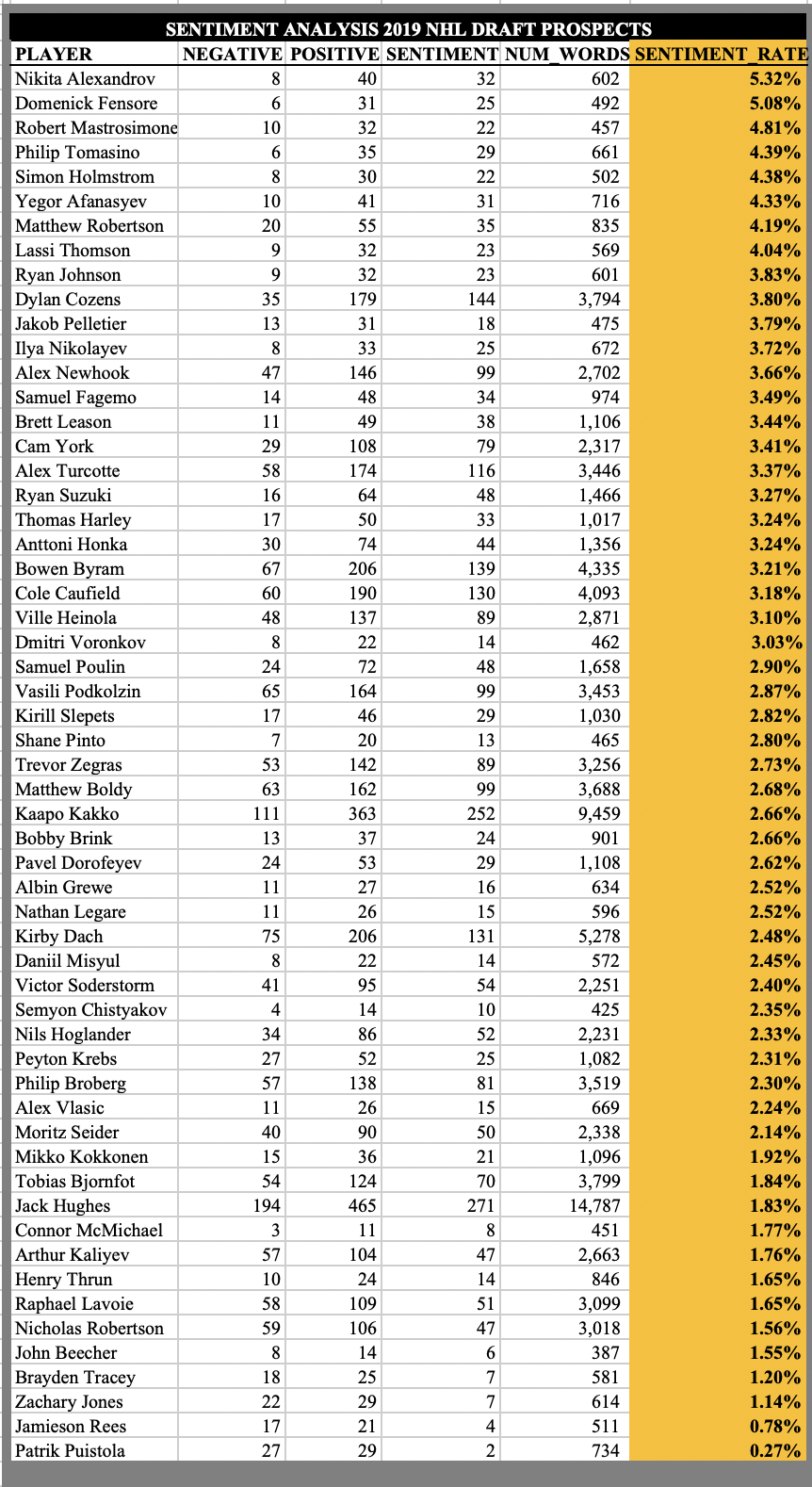 This probably isn’t perfect either but there are still some interesting results. For example, Domenick Fensore (D, USDP) is among the top ranked players. Our models were relatively high on him compared to draft rankings but maybe scouts are higher on him than they realize? Arthur Kaliyev ranks lower which shows the discrepancy between his NHL CSS Ranking and our Model’s rankings.

Now, lets look at which twitter users are highest on each prospect:

Unsurprising to see OppenheimerEvan’s highest ranked player be Bobby Brink. OppenheimerEvan would be classified as a hockey analytics analyst; therefore, he probably has probably done his homework on Bobby Brinks historical production and how that translates to the NHL. Of course there is a bunch of Jack Hughes and Kaapo Kakko, but HockeywithHannah appears to be on the Cam York Bandwagon, although HockeywithHannah did not have many applicable words relative to other twitter users.

As mentioned in our NBA Draft Prospect Sentiment analysis, it is far from determined whether or not sentiment (or at least in this form) has any predictive power of NHL success. Nevertheless, it is certainly a fun exercise!