Now that the Cavs and Warriors finally met up in the highly anticipated NBA Finals rematch only to let us down with a 4-1 blowout, we take a look back at how our models fared in the NBA Playoffs as a whole. To recap, we have a Playoff Series Win Probability Model that predicts a percent chance that a team wins a given series, as well as our Playoff Betting Models that predict point spreads and totals for each game.

Going into the playoffs, our models gave Golden State a 60% chance of winning it all and saw them as a heavy favorite against almost every playoff team. Of the 15 playoff series that were played in  2017, our model correctly predicted 14 winners, only missing on the Cleveland/Toronto 2nd round matchup. Our models have historically undervalued teams led by LeBron James – specifically the teams that coasted their way through the regular season, such as this year’s Cavs. This is to be expected to some degree, as the models are built on statistics from the regular season.

Looking back at 2015, 2016, and now 2017, our models have predicted the Warriors as champions each of the last 3 years. In those years, the models have predicted 39 of 45 series winners correctly (or 87%), including 23/24 in the first round, 9/12 in the second round, 5/6 in the Conference Finals, and 2/3 in the NBA Finals. If the Warriors are able to keep the squad together, I would expect more of the same next year. If not, maybe the model will predict some new blood to challenge them. 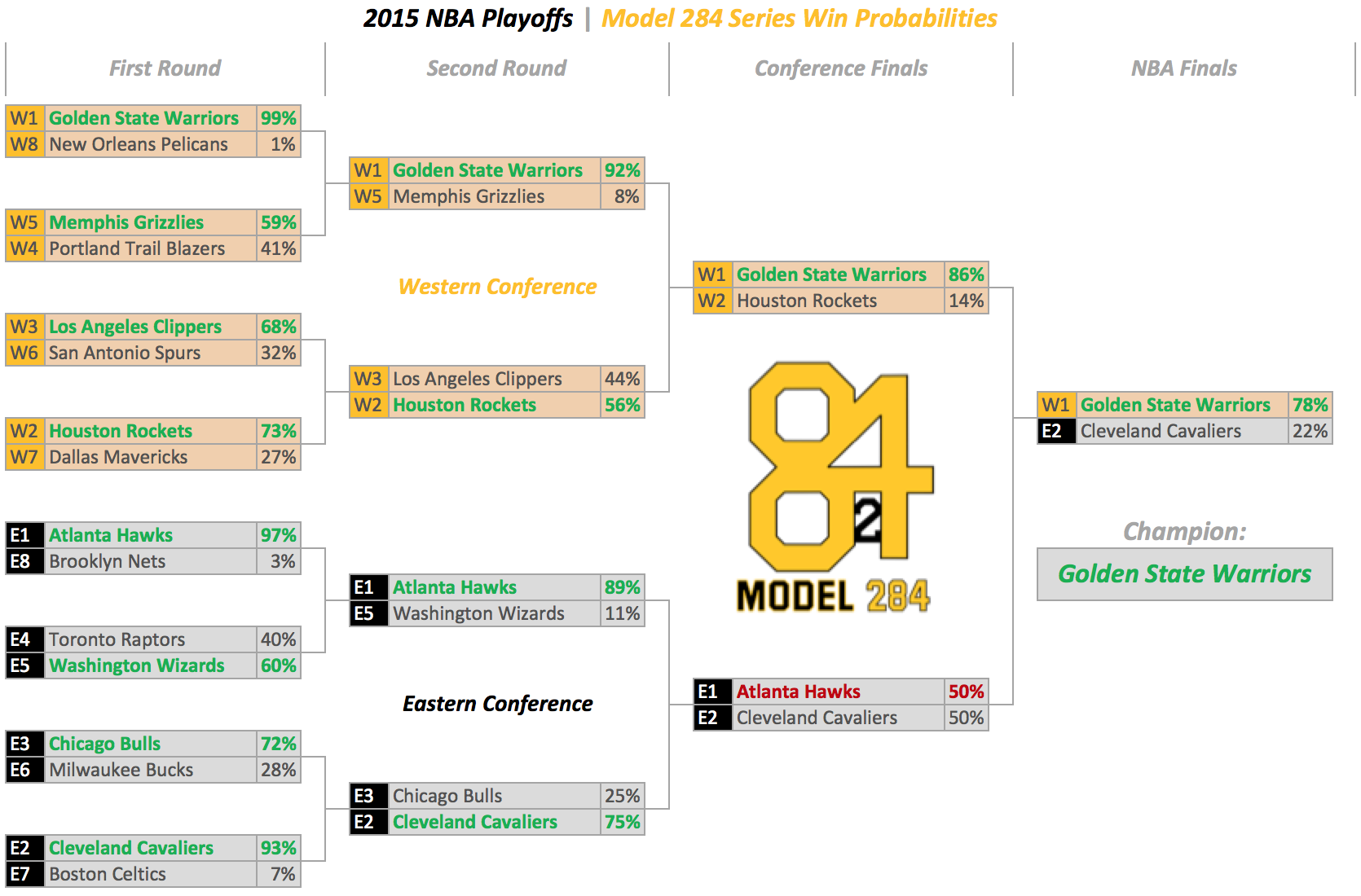 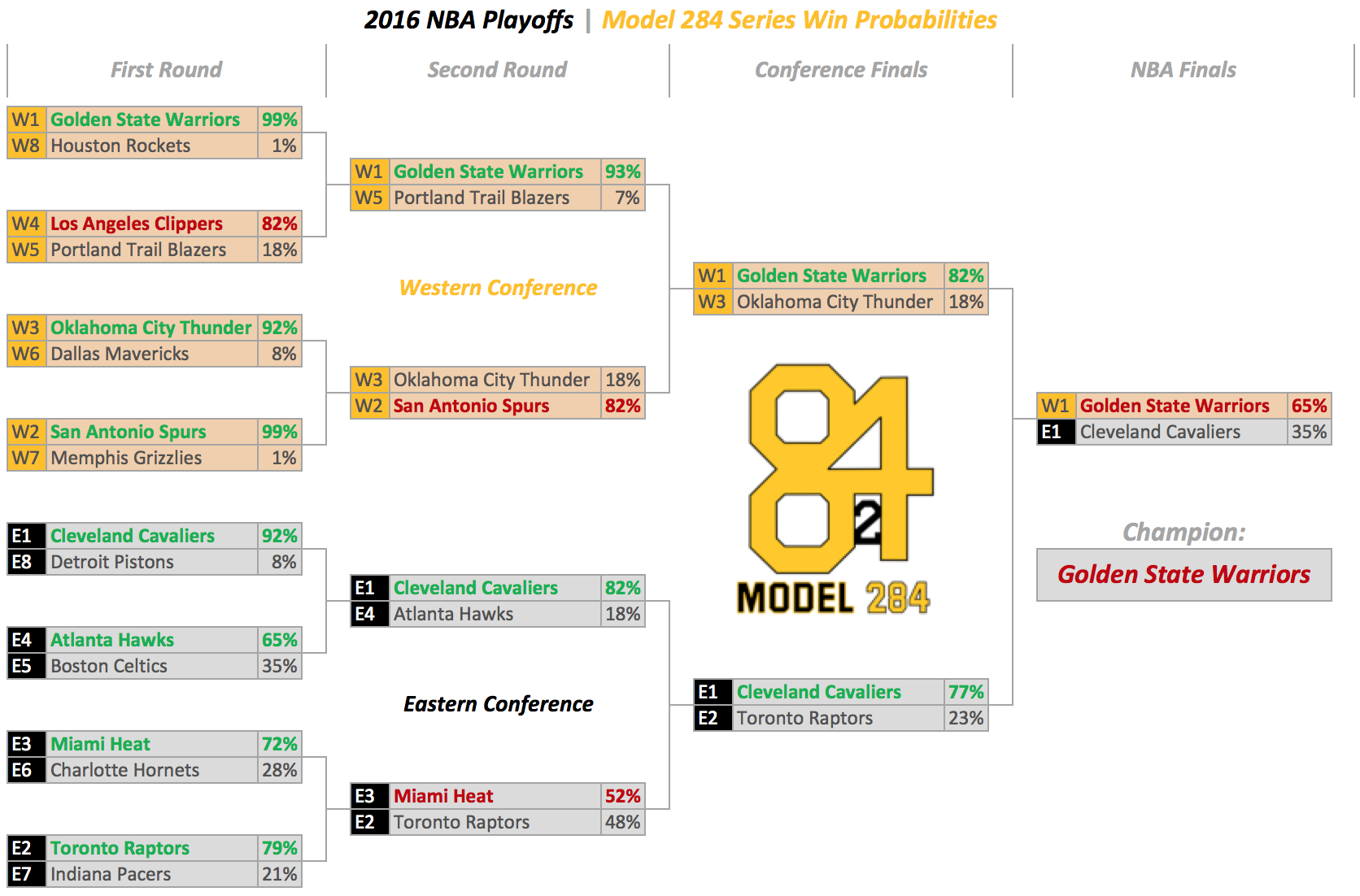 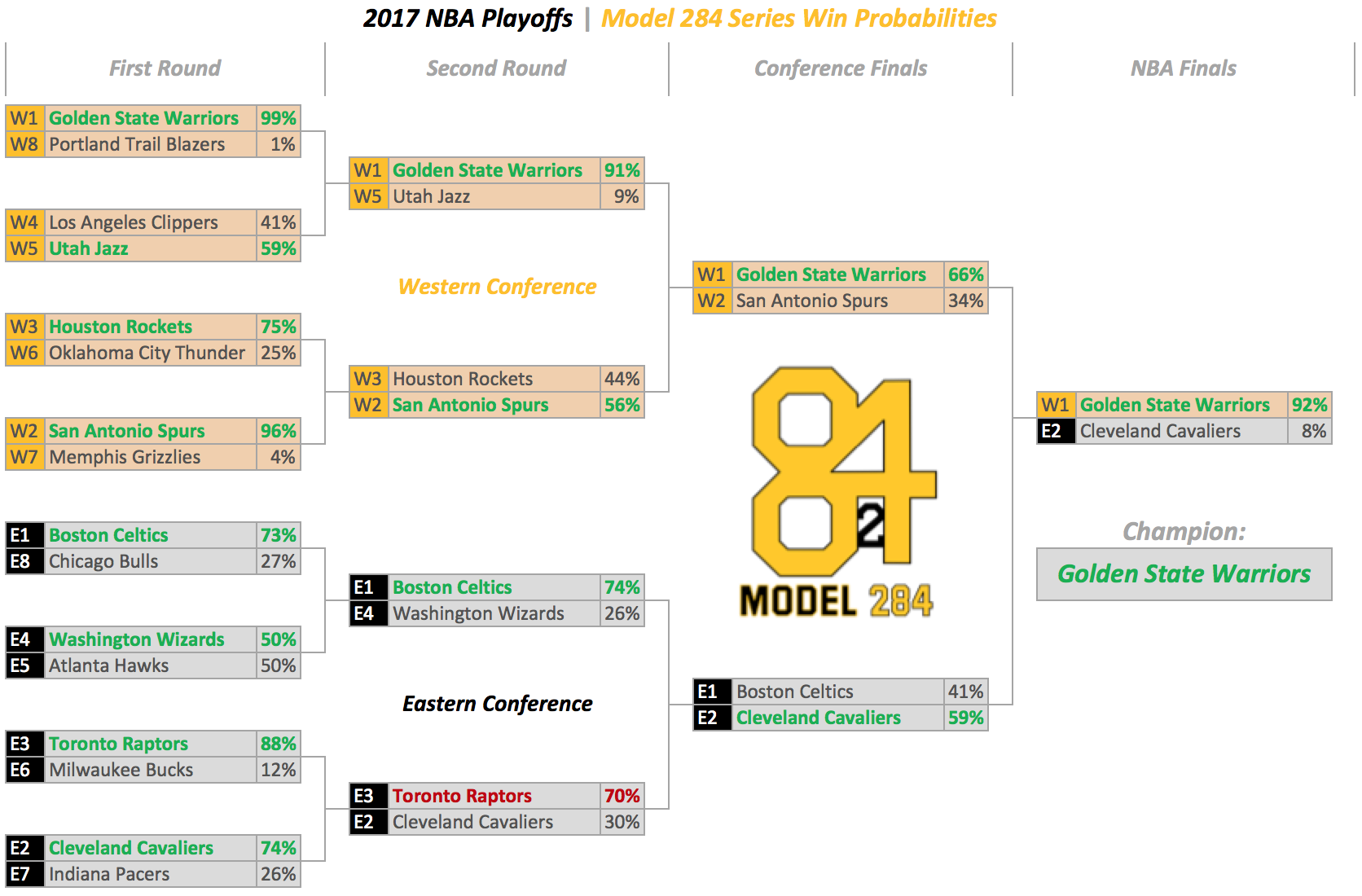 This year, we used our models to make predictions on the 2017 NBA Playoff games as they happened. On average, our models have historically favored the under and the underdog, so it was good to see them hold their own in a year where most games went over and most of the favorites covered. Here is a summary of how each model performed in the 2017 Playoffs (note that the table below excludes games that Kawhi Leonard and Isaiah Thomas missed):

If we apply more selective criteria to the predictions, we see an improvement in model accuracy. Essentially, this means only considering games in which the models agree with each other and are far away from the Vegas line, as explained here. The idea is that when our models are very close to the Vegas line, there is not much advantage to be gained, so focusing on games where our models see things differently from Vegas should lead to more of an edge. Only considering games meeting these criteria, here are the historical accuracy marks for both spreads and totals on out-of-sample predictions:

Applying these criteria to our predictions for the 2017 NBA playoffs, our models saw similar success to their historical accuracy percentages, going 26-10 overall, or 72.2% ATS (note that the table below excludes games that Kawhi Leonard and Isaiah Thomas missed). Again, it is noteworthy that our predictions held up in a year where most outcomes did not favor the historical trends (lots of overs and lots of favorites covering).