Every July since 2004, a couple hundred NBA hopefuls have gathered in Orlando, Utah, and Las Vegas to compete in 5-6 junk ball basketball games known as the Summer League.  Whether you’re an NBA operations analyst or just a fan, NBA Summer League provides another opportunity to see a player—or in our case, another data point to project a player. But how much should we really take away from a few junk ball games in the beginning of July? Or, in “statistical” terms, what is the predictive value of summer league for a player’s actual NBA Performance? This analysis seeks to provide insights into how historical Summer League performances have related to NBA performances. More specifically, we’ll seek an answer to questions such as: how much can NBA Summer League performance tell us about overall rookie performance? How about second-year returning players? What should we take away, if anything, from these varying levels of performance in Summer League? In this article, I will focus solely on NBA rookies, providing meaningful data points and inferences about which statistics best translate from Summer League to NBA Rookie Season. 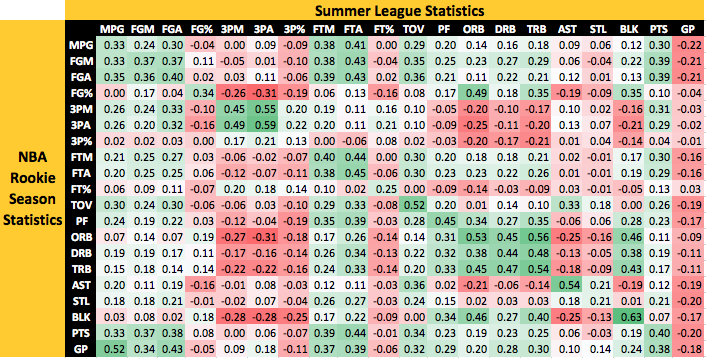 There are 400 correlated variables in this matrix, which is a lot of information to digest. There are endless amounts of relationships to be explored, but I will try to keep it short for now. The most highly correlated set of variables is Summer League Blocks and NBA Blocks (0.63). Next, total rebounds show a relatively high correlation, at 0.54. Interestingly, the number of summer league games played and all NBA Rookie Season Statistics are negatively correlated, highlighting the idea that top draft picks usually don’t play all 5 or 6 games in summer league. Total rebounds and blocks are statistics that inherently vary by position. In order to reduce that noise across positions, I have broken out the correlation matrix into the three position groups we used in our Similarity Score Algorithm: Guards (Primary Ball Handlers), Wings, and Bigs. 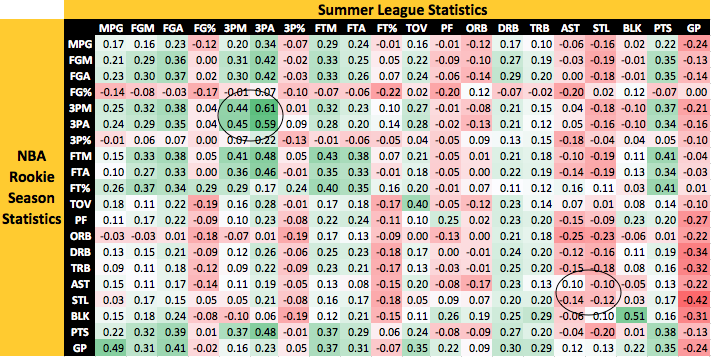 For guards (ball handlers), I have circled distinct areas of interest: three pointers and assists/steals. Guards that shoot threes in summer league, whether efficient or not, are also going to shoot them as NBA rookies, while high assist and steal marks don’t necessarily translate as well to NBA rookie season performance. Summer league offers less structure and more so-called junk ball, therefore steals and assists are flukier than in real NBA games. 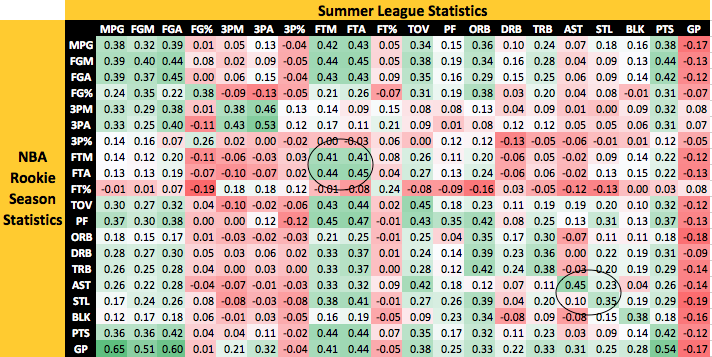 Wings generally contribute more uniformly across a box score compared to big men and guards. Notably, there is a much stronger positive correlation between assists and steals for summer league and NBA Rookie Season performance compared to guards, so those five steals for Jayson Tatum appear to be a good sign. Next, getting to the free throw line is another trait that appears to translate, in addition to three point shooting volume.

At last, we reach the big men. Bigs have some interesting correlations going on. First and foremost, the extremely high positive correlation between Summer League FTM/FTA and TOV/PF and most NBA Rookie Season Statistics is staggering. Some of this can likely be explained by the extreme differences in types of bigs. For instance, some bigs, such as Joakim Noah or Karl-Anthony Towns, pass and touch the ball a lot more than bigs like DeAndre Jordan, who simply dunks the ball. In short, bigs that show potential in playmaking, blocking shots, and getting to the line should be able to translate that to the NBA.

We’ve explored correlations and relationships of simple box score statistics from Summer League to NBA Rookie Season performance. But how much predictive power does NBA Summer League have on overall rookie performance? In order to capture NBA rookie season performance, we used a metric called Win Shares (though other all-encompassing metrics such as Value Over Replacement Player, Box Plus Minus, Real Plus Minus, and more were also explored). Win Shares is a player statistic that attempts to divvy up credit for team success to the individuals on the team. Win shares can technically be any value positive or negative, and a negative value would mean a player was so poor he essentially took away wins from his team. For more info on the calculation of Win Shares, see this breakdown. Here is an example of the top 5 Win Shares from 2015 NBA Rookies, to give us a better idea of what the Win Shares metric looks like:

Now, using Win Shares as the response variable, I built a simple multiple linear regression model to explore how much variance in Win Shares can be explained by NBA Summer League Performance. After adjusting for minutes, the following predictive variables were used: Total Rebounds (TRB), Field Goal Attempts (FGA), Free Throw Attempts (FTA), Three Point Attempts (X3PA), Assists (AST), Steals (STL), Blocks (BLK), Turnovers (TOV), and Personal Fouls (PF). Note that each player’s numbers were standardized by position prior to fitting the model. The table below shows the coefficient for each variable in the regression model:

One measure of so-called predictive power is adjusted R-squared. First off, R-squared, also known as the coefficient of determination, is the proportion of variance in the dependent variable (Win Shares) that is explained by the predictive variables (box score stats). Adjusted R-squared takes into account the number of independent variables included. In this case, our “simple” model explained roughly 10.9% of the variance in rookie win shares from the aforementioned Summer League statistics, which is not particularly high.

In the final model, I explored a number of ratios and interactions, ultimately settling on two interactions between Field Goal Attempts and Free Throw Attempts as well as Assists and Turnovers (in addition to our previously included variables). This final model showed Summer League performance explaining 15.5% of the variance in Rookie Win Shares. While this isn’t astronomically high, it does show there is some predictive power in Summer League on NBA Rookie performance.

Now let’s have a little fun and make some out-of-sample predictions. The idea of out-of-sample predictions stems from the concept of cross validation, which is the process of removing a sample of data, known as the testing dataset, and then training your model on the remaining data, the training dataset. Finally, we use the trained model to make predictions on the test data.  In this case, I removed a single player from the dataset to test on and trained on the remaining players in the data. Below are the top 10 predicted Rookie Win Shares:

While we can certainly spend more time building a “better” predictive model using various variable selection techniques and machine learning algorithms, the point of this exercise was less about prediction and more about understanding the relationship between summer league performance and NBA Rookie Season performance. Sometimes the simplest models are the most effective in that they provide easier interpretation.

NBA Summer League games provide another opportunity for teams (and fans) to get a glimpse of NBA prospects. There are certain statistics that should be keyed into when watching NBA summer league games. For instance, scoring (whether efficient or inefficient), playmaking skills (especially for bigs and wings), and the ability to get to the free throw line translate well to an NBA Rookie Season. And while 3-point shooting percentage doesn’t translate well (at least in our extremely small sample), players that attempt more 3s in summer league should continue that into their NBA Rookie Season. Furthermore, steals have a relatively weak relationship from Summer League to the NBA. With all of that, you should expect to see your prized top rookie perform well in summer league, but it is not the end all be all. At the same time, be sure to cool your jets on those 27 point, 3 steal junk ball performances (i.e. Kris Dunn in 2016).