In the sport of hockey, we often value players that are more physical, especially those that additionally produce points. In this week’s My Model Monday, I explored the importance of hits on NHL hockey games.

We have to learn to walk before we can run, so, first off, what even is a hit? Here is commentary from a Model 284 source, for a valid ‘Hit’ to be registered on the stat sheet, the player to be credited with the hit must a) intentionally initiate physical contact with the player possessing the puck, and b) the player sustaining the contact must lose possession of the puck as a result of the contact. If the contact results in a penalty, no hit can be awarded.  The intensity of the contact does not enter into the equation, nor does the loss of possession necessarily involve a turnover.  If the puck is retrieved by a teammate — or even the player himself —  a hit is still earned.  So, virtually all of those devastating “hits” that make the NHL Top Ten videos shown around the league are not “hits” as far as the stat sheet goes, as the puck is usually gone. As you might imagine, the hitting statistic is somewhat subjective.

First, let’s start by getting ourselves acquainted with hitting statistics in the NHL. Below is a list of each team’s total hits from the 2017-18 regular season (less a few games that had corrupted play-by-play data): 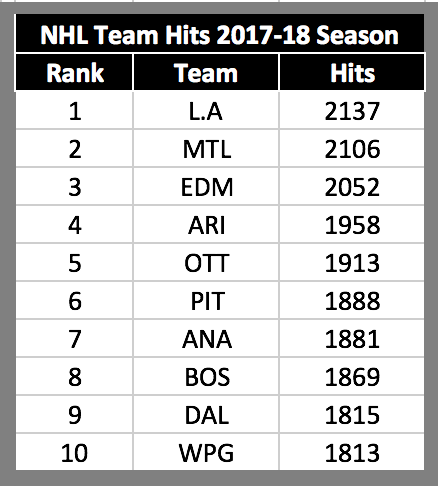 Seeing Arizona, Montreal, and Edmonton among the top teams leads one to wonder what the correlation between Hits and Wins is. In the scatterplot below, I have pulled in a comparison between hits per game and wins for the 2017-18 NHL season: 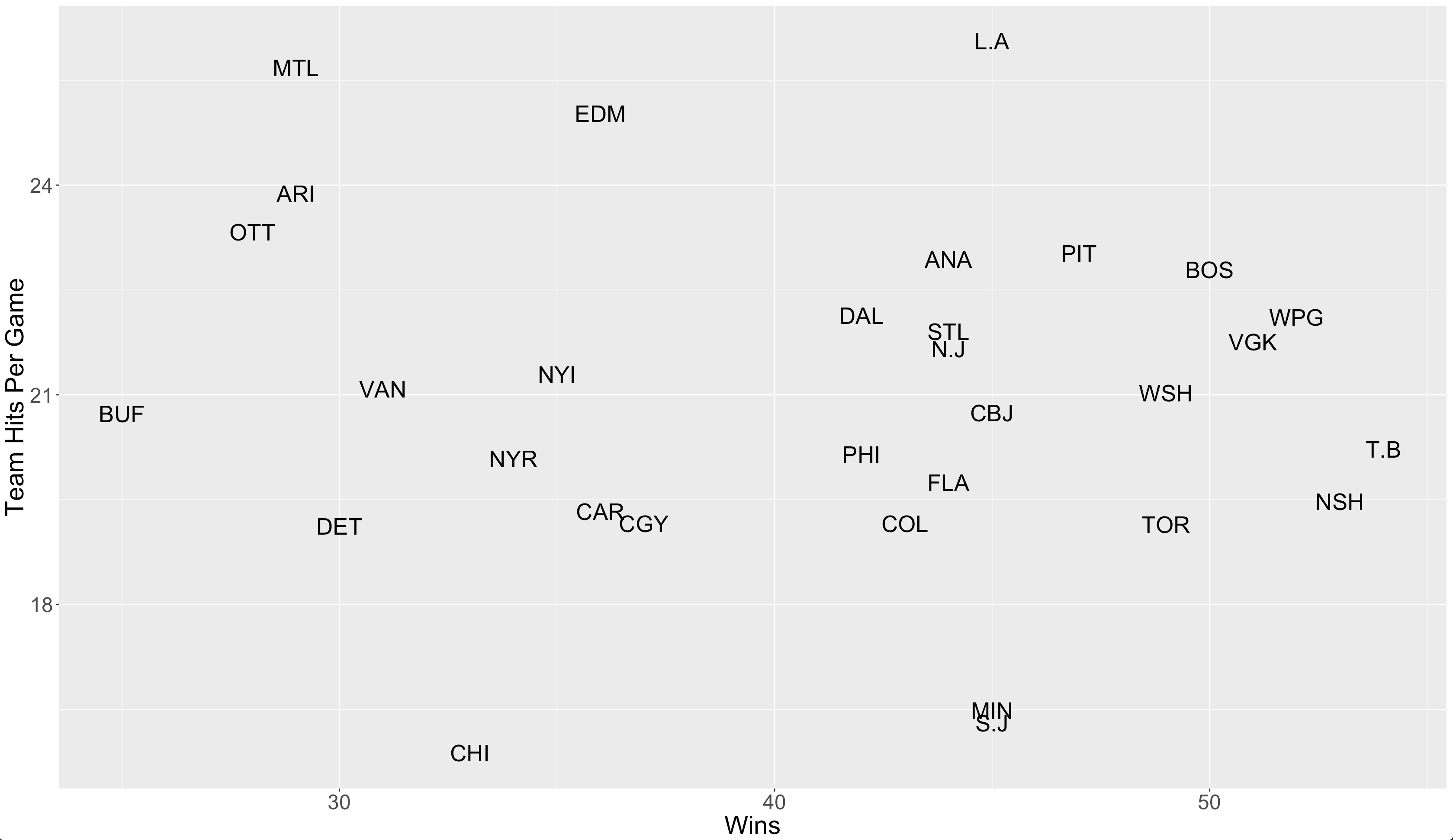 The correlation between hits per game and wins is just -0.10 . This aligns with previous research by Garret Hohl and at War-on-ice, suggesting that overall hits are a poor predictor of goals and winning in the NHL. Furthermore, at an individual player level, the correlation between hits and goals is nearly 0. This fits intuition – when you think about the top hitters in the game, Crosby, McDavid, Malkin, etc. don’t exactly come to mind. Ovechkin is one of the goal scorers that actually does produce a high number of hits, but he appears to be the exception rather than the rule. Often times these physical players have a role because coaches believe that they have an impact on winning games. Maybe the next step is to explore the events that result from a hit. By looking at play-by-play data, we can explore the most often occurring events following a hit. But before we do that, let’s frame how often specific events occur by looking at the top of the events from the 2017-18 NHL Season: 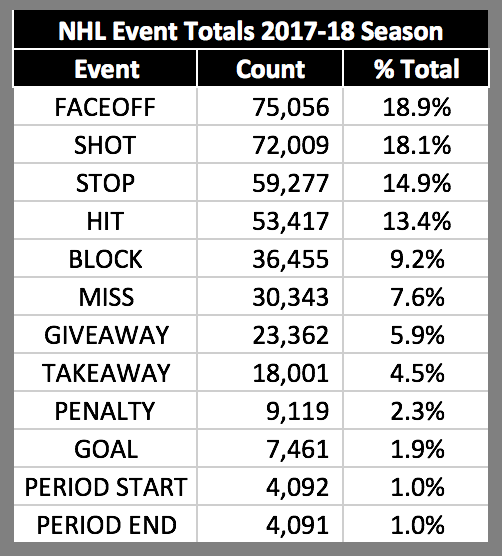 Hits represent 13.4% of the total events occurring in a hockey game. For good or bad, hits are clearly a major part of the game. Now, looking at the events following a hit: 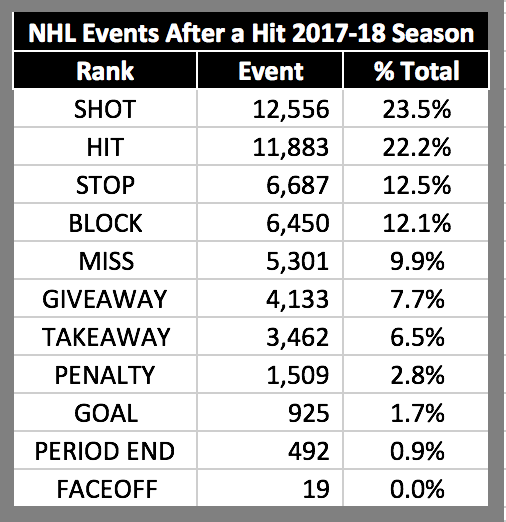 The biggest jump is in Hits. A Hit is followed by another hit 22.2% of the time, up 8.8% from the percentage of all events. If you ever played hockey, you know this makes intuitive sense – when a hit is thrown, often times another hit follows as there may be a battle along the boards, or a response to a hit. Shots on goal also experience an uptick in percentage for events following a hit. As further evidence of hits as a poor predictor of goals, goals show a decrease in frequency for events following a hit. It is important to note that the table above does not differentiate by which team registered the event; therefore, the table below takes it one step further. Note – this is shown from the perspective of the team that registered the hit: 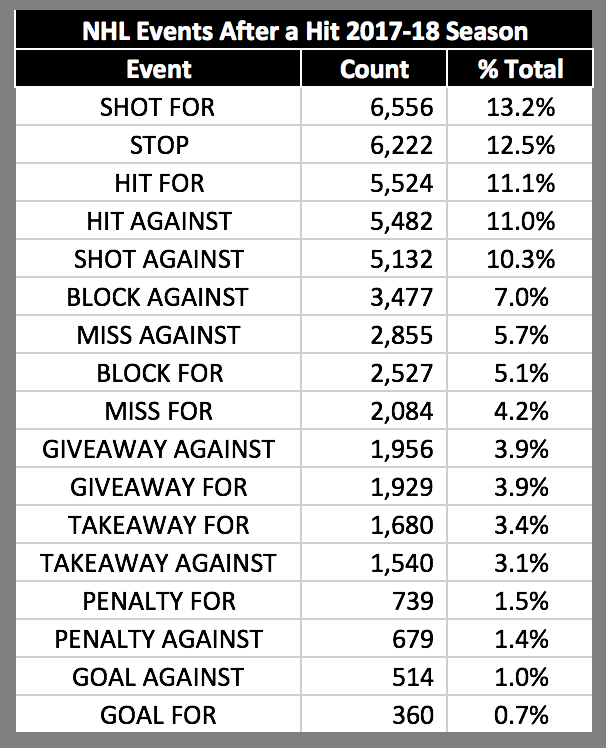 Fairly even splits across most statistics. Most interestingly, a greater number of goals were scored against the team that registered a hit. My coaches use to say to be careful going out of your way to throw a hit because it can lead to you being out of position. This idea could be in play here.

Flipping the equation and subsetting on even strength goals now, let’s look at the percentage of goals that were generated from a hit. Below is a table of the events that occurred prior to a goal being scored in the 2017-18 NHL season: 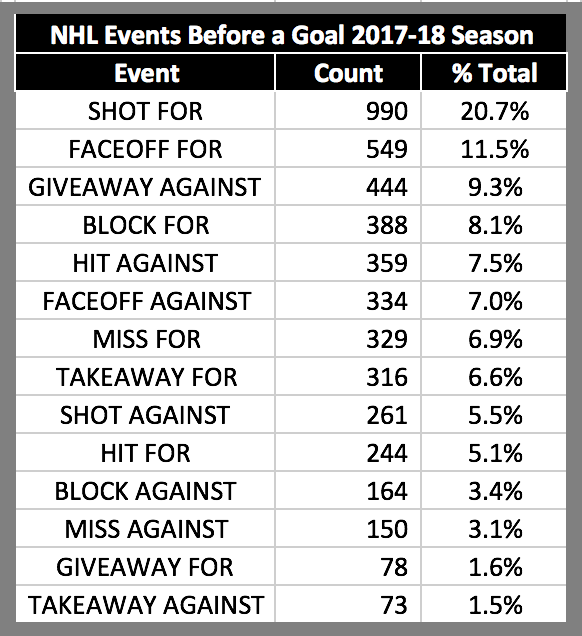 Again, we see the opposite impact of a hit coming into play here with a higher percentage of goals generated from a hit by the opposing team than the scoring team. A hit for does not appear to be a top occurring event leading to a goal. But in my experience playing hockey, often times a hit doesn’t immediately result in a goal. Meaning another event such as a takeaway, giveaway or shot happens before a goal is scored. Therefore hits may be an inducer of a chain reaction of events that ends with a goal. Looking at the combination of of two events prior to a goal: 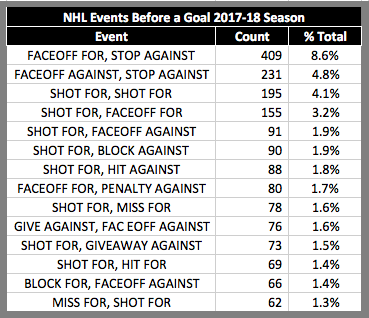 While not shown in the table, Hits against, even when two events prior to a goal, continues to appear more frequently than Hits for. We can continue to slice and dice the data in different ways, but, thus far, research has shown that there does not appear to be a positive relationship between hits and goals scored, and, if anything, there might be a negative one. Still, I am not sure this or previous research entirely answers the many people’s inquiry: what are the effects of physicality on the game? Maybe some evidence in favor of physicality is that we have seen smaller players at times struggle more than bigger players. However, that could be a result of their shorter leash, which could in turn be created from this wrong assumption of the impact of hits on the game. Ultimately, there is still plenty of room to explore the impact of physicality in the game of hockey.

2 thoughts on “My Model Monday: Understanding the Impact of Hits in the NHL”