Ever since the first Olympic games were recorded in 760 B.C., sports have had an important social component in society. Whether its Baseball in Japan, Soccer in England, or Hockey in Canada, it’s almost impossible to live in a major sports market without being somehow affected by the local sports. While these celebrations of competition and the strive for excellence have brought neighbors together for centuries, there is another tradition that bonds us in a way that is much stronger: the tradition of complaining about our teams. It doesn’t matter if your team is a dominant force, or a bottom-feeding afterthought; we will always find something to complain about. But is it all warranted? Surely there are teams whose suffering has afforded their fans the right to complain more than all the others. In this week’s My Model Monday, I attempt to quantify the factors that lead to this allowance of complaining for each NFL team, and rank each fan base on their comparative level of what I like to call “complain-ability.”

Although there are countless aspects that factor into complain-ability, many of them are specific to an individual. For purposes of this article, I focused on the factors that pertain to the fan base as a whole, and calculate figures for the duration of each team’s existence during the Super Bowl era (1966 – 2017). However, each factor I used was weighted more heavily for recent years (i.e., a Super Bowl win in 1970 is less valuable than one from 2017), since we are talking about current day complain-ability. We used Pro Football Reference‘s definition of teams, meaning that some teams in the list switched cities at some point in their history.

For obvious reasons, Super Bowl related factors were weighted most heavily when constructing these rankings. We included a “Super Bowl Wins Above Expectation” metric that measures the difference between how many Super Bowls a team has won and how many that team would expect to win based on how many years they have been in the league. For example, the Houston Texans  have played 16 seasons, and there were 32 teams in the NFL in each of those seasons, meaning that their expected Super Bowl Wins = 16*(1/32) = 0.5, but they have won 0 Super Bowls, so their value there is -0.5. Beyond Super Bowl (SB) performance, the additional factors that go into these rankings are: point differential, conference championship appearances, playoff appearances, and SB wins relative to playoff appearances. 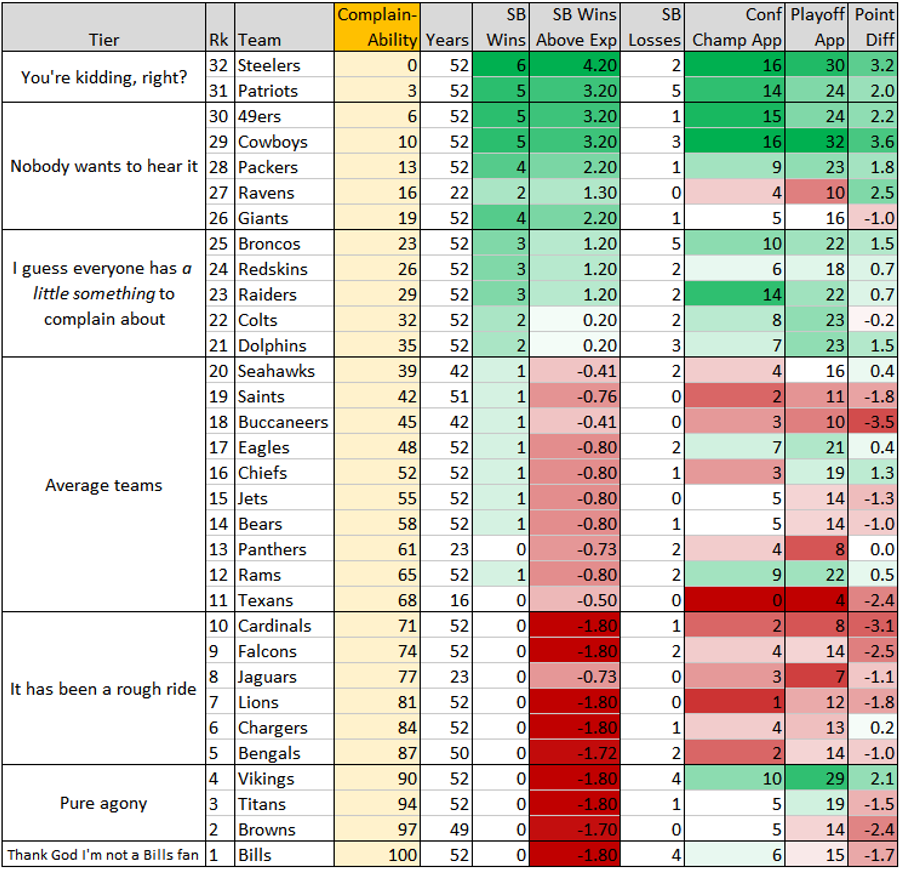 Are you a Steelers or Patriots fan? Are you thinking about complaining about your team? If you answered yes to both these questions, red flags should be going up in your head.

Pittsburgh Steelers – Listen Steeler fans; you have a team that is near the top in Super Bowl wins, Conference Championships, winning percentage, and point differential, in just about any period of time in NFL history. When was the last time the Steelers weren’t a Super Bowl contender?

New England Patriots – Have you ever heard a teenage girl complain because her Dad would only give her $20 to go out with her friends? Replace the girl with a Patriots fan, and replace the $20 with 11 wins. Next question.

Nobody wants to hear it

These fans biggest grievance is that they are winning a lot less than were were during their peak dynasty years. So they are upset that you are no longer dominating every year? Just keep your whining to yourself, because nobody wants to hear it.

San Francisco 49ers – Sorry 49ers fans, but a few down years aren’t going to overshadow a dynasty led by two all-time great QBs and the greatest receiver of all time. Oh yeah, and weren’t you just in the Super Bowl like 5 years ago?

Dallas Cowboys – I get it, okay? Your haven’t won a Super Bowl since 1996, but 14 other teams haven’t even been to the Super Bowl in the time frame. You had one of the great NFL dynasties, and you’re constantly competitive in what may be the best division in all of sports.

Green Bay Packers – 25 consecutive years of Hall of Fame QB play and 4 Super Bowl wins will earn you no sympathy from me, the model, or other fans.

Baltimore Ravens – Winning 2 Super Bowls in only 22 years as a franchise is incredible. There are 14 teams who don’t have 2 in the last 50 years.

New York Giants – The Giants haven’t been as dominate as some of the other teams ranked around them, but they have won 4 Super Bowls with only 5 conference championship game appearances. They win big and don’t play with your heart along the way.

I Guess everyone has a little something to complain about

These fans are more privileged than most. They have been very succeful, but will still find reasons to whine. They think that they are just like all the other “Average Teams”, but, for one reason or another, they aren’t.

Indianapolis Colts – If Tom Brady and Bill Belichick didn’t fall into each other’s lap, who knows what the Colts could have done with Tony Dungy and Peyton Manning. Outside of this big “what if” there’s not much else the Colt’s fans have to complain about.

These teams represent what an average NFL fan base goes through, with their fair share of ups and downs over the years. While fans of these teams may argue to be higher or lower, they have had some taste of success, and have not been plagued by eternal disappointment.

Philadelphia Eagles – The Eagles don’t fit the same mold as the other teams around them, but that’s because they won a Super Bowl yesterday – they should stand out from the 31 other teams. And aside from Super Bowls, they rank above average in most other categories, so now that the SB box is checked, they have much less to complain about.

It has been a rough ride

Either due to their inability to compete consistently in the NFL, or their tendency to disappoint their fans, these teams find themselves in a very complain-able situation.

Arizona Cardinals – Although they have been competitive in the 2000’s, the Cardinals have spent most of their multi-city history as afterthoughts. They find themselves near the bottom of the league in most of the fundamental measures of NFL success.

Detroit Lions – Despite being home to some of the greatest playmakers the NFL has ever seen, Detroit hasn’t had a lot of success to show for it. Among the 4 teams to never play in a Super Bowl, only the Texans have less than Detroit’s one Conference Championship appearance (and they have only been around since 2002).

This is where the real, spirit breaking pain begins. When someone tells you that they’re a fan of these teams, you genuinely feel bad for them. Although, they have reached this point of elite Complain-ability in different ways, it’s impossible to deny the torment that these teams bring to their fans.

Minnesota Vikings – Has there ever been a fan base more consistently let down than Minnesota? The Vikings have twice as many division titles as any other team that hasn’t won a Super Bowl, and they are only team in that group with an all-time winning percentage over 50%. In fact, they are third among all NFL teams in terms of playoff appearances, 2nd in terms of division titles, and 5th in terms of point differential, yet they have 0 Super Bowls.

Cleveland Browns – Cleveland is on an unbelievable run in the Hue Jackson era, but not the kind of incredible run that fans want. After two seasons, the Jackson-led Browns are an unbelievable 1-31. However, this isn’t much of a fall from the pre-Jackson Browns, who have struggled for a majority of their 49 years in the NFL.

Buffalo Bills – Being a Bills fan combines all the different kinds of pain that other fan bases experience. They have experienced a level of disappointment unlike anything else I’ve ever seen in sports by losing four consecutive Super Bowls, and then they turned around and found a way to be completely irrelevant for almost 20 years. Having the Patriots in the division is just icing on the cake.