Unfortunately for Timberwolves fans in the past decade, the most exciting part of the season has consistently been the NBA Draft. And for yet another offseason, this is the case. Although the NBA draft provides excitement in the possibility of landing the next Steph Curry, Tim Duncan, or Chris Bosh, the reality in Minnesota has been grabbing point guards that cannot shoot, 25-year olds such as Wesley Johnson, and black holes such as Derrick Williams and Shabazz Muhammad. While the last few years have presented promise by way of Karl-Anthony Towns, Andrew Wiggins, and Zach LaVine, the Wolves’ drafts have yet to bear fruit in the form of a playoff appearance. So let’s take a walk down memory lane and relive the agonizing decisions made throughout the McHale and Kahn eras through the lens of Model 284’s main Peak NBA Statline Projection (PNSP) draft model, NBA Role Probability, and Similarity Score Models.

The last Minnesota Timberwolves playoff appearance came from a core of Sam Cassell, Latrell Sprewell, Kevin Garnett, and, of course, Mark Madsen, in an era when the Wolves were actually above the NBA league average for attendance per game (as seen in the plot below). 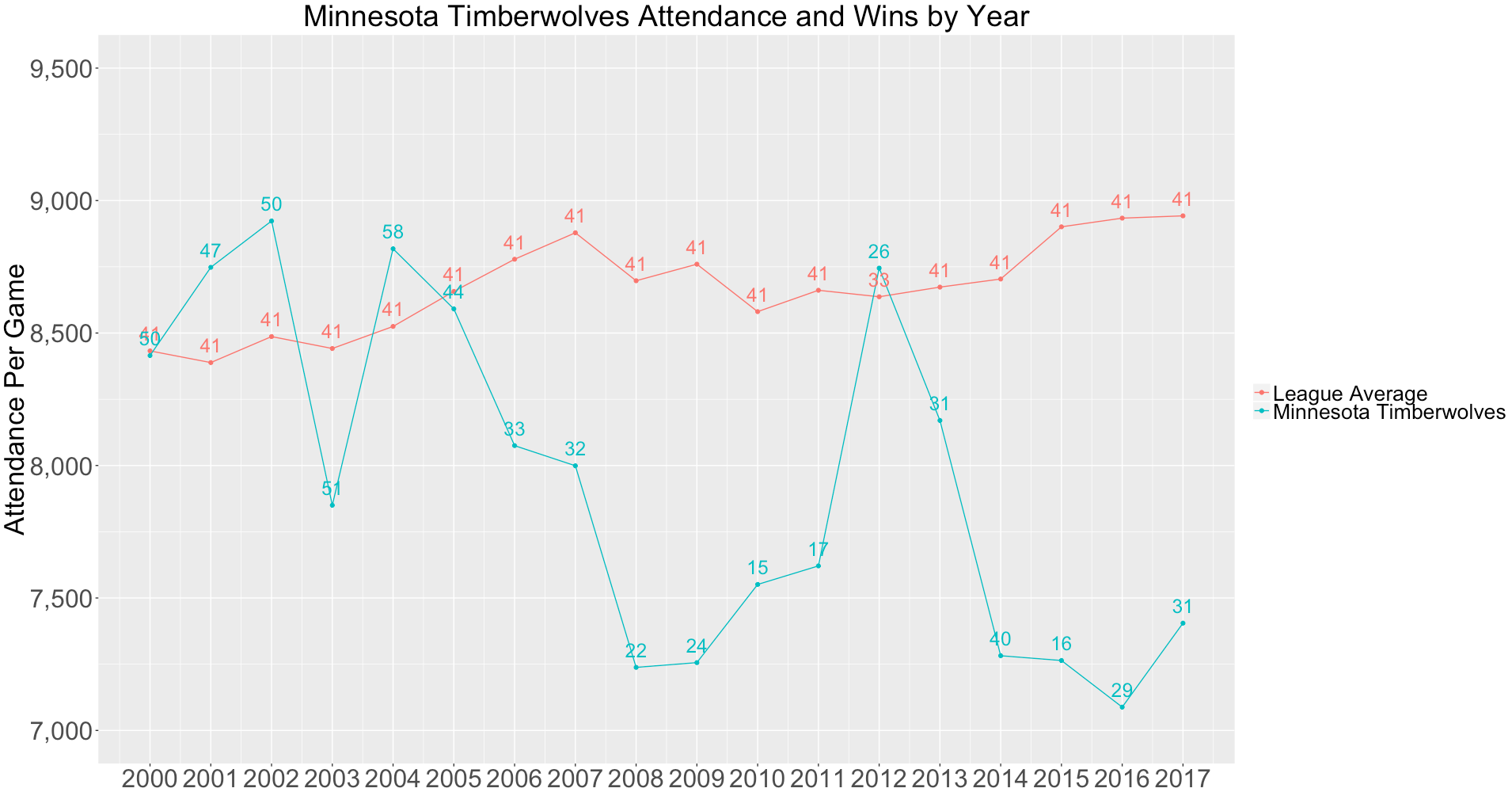 The Wolves are in dire need of a playoff appearance if they want to get this fan base back. As a result of these continual seasons of losing, the Wolves have picked in the lottery every season since 2004 (except for 2012, where they traded the pick). Overall, the draft has not been ideal for the Timberwolves, one component of poor organizational management. The table below displays the Timberwolves’ draft picks since their last playoff appearance. Note that these are the players that actually entered the Timberwolves training camp. The NBA has these stupid rules where if you swap picks on draft night, the team you swap with technically still makes the pick. So, although Kevin Love never played a game for the Memphis Grizzlies, he will go down in history as a Memphis Grizzly draft pick.

Before we start digging into each year, what is considered a good PNSP score? Below is a density plot showing PNSP scores for players drafted from 1997-2016, who played at least one season of college basketball. An average PNSP score is around 45, meaning scores are skewed right with more low scores than high ones. 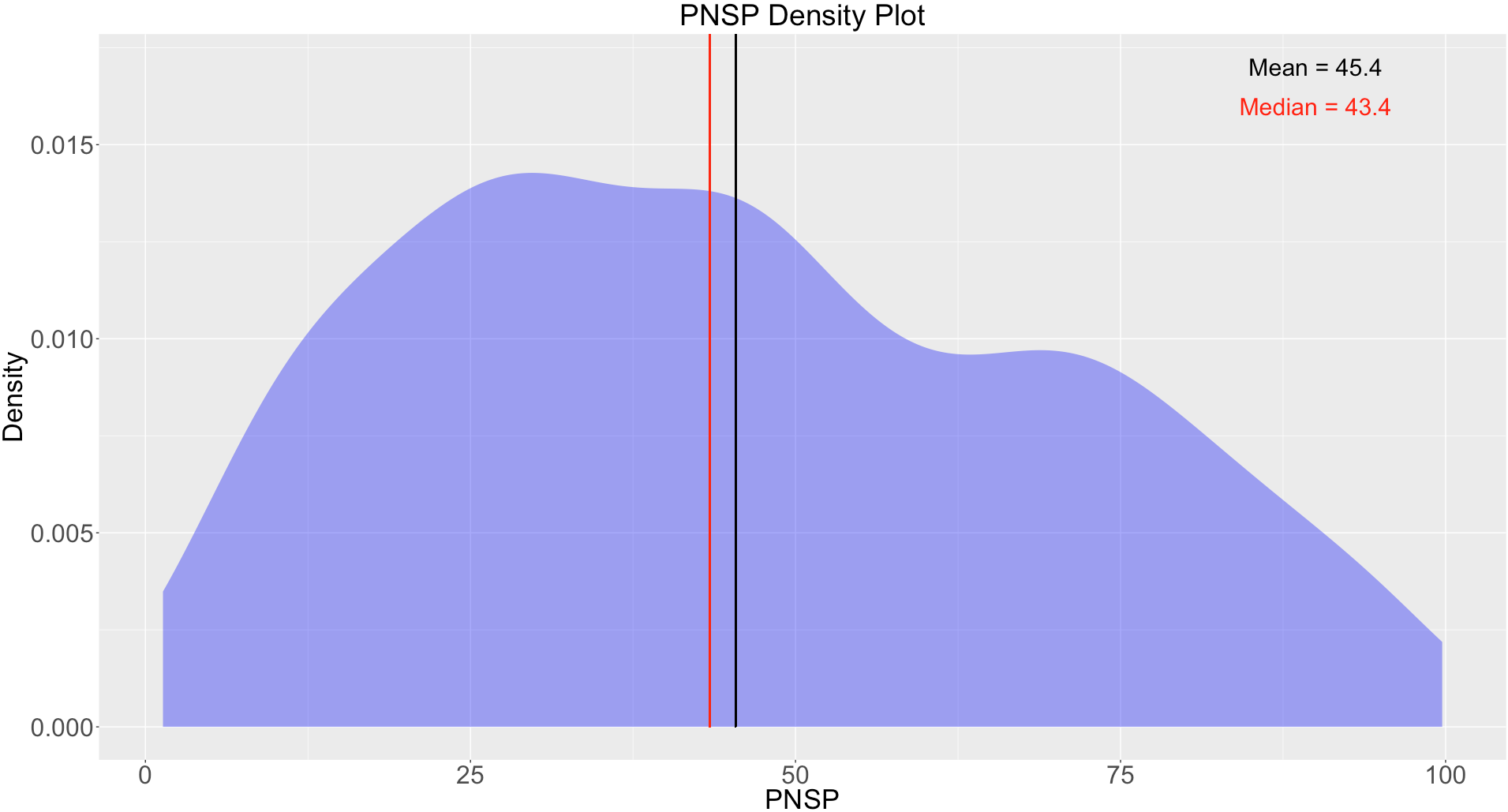 Turning back to the Timberwolves, only 12 of their 21 draft picks that played college basketball had an above-average PNSP score. Even worse, some of the Timberwolves’ top lottery picks are those with poor PNSP scores – generally, lottery picks have the highest PNSP values, so this is a giant red flag… Let’s walk through the Timberwolves historical 1st round draft picks one-by-one and analyze who PNSP had ranked highest among available players when the Timberwolves were drafting. Note that there are a lot of what-ifs when historically reviewing drafts since we do not know what would have happened with future team success / management moves if the team had selected a different player.

We begin in 2005 when the Timberwolves selected Rashad McCants at 14th overall. PNSP was a fan of Rashad McCants, rating him with a value of 79.9. McCants was a deadly shooter on a championship-winning North Carolina team, but his NBA career was short-lived; perhaps the most impressive part about McCants NBA career was that he dated Khloe Kardasian, or maybe when he said that he was better than 95% of NBA players while playing in the D-League. While PNSP cannot determine if a player is “coachable,” I do fault the Timberwolves for improperly evaluating the mental makeup of McCants. If the Wolves were drafting strictly by PNSP, Nate Robinson (82.5) would have been the best player available.

In 2006, Kevin McHale handed away Brandon Roy to the Portland Trail Blazers for absolutely nothing. McHale opted for Randy Foye (35.3), one of many Wolves lottery picks that PNSP scored well below average. Now, PNSP did not love Brandon Roy either (48.9), but it certainly ranked him higher than Foye. Given that McHale basically let the Blazers pick ahead of the Wolves for free, we will assume Brandon Roy is off the board, and thus PNSP would’ve had the Wolves take Ronnie Brewer (88.6). Probably not an upgrade from Randy Foye, but not necessarily a downgrade, either. Honestly, McHale might have been a secret genius, knowing that Brandon Roy’s career would be short-lived and that the Wolves would proceed to screw the Blazers over a couple years later by signing a retired (because of injury) Brandon Roy and force the Blazers to pay off the contract, rather than insurance.

The next year, the Wolves had another elite selection of a below average PNSP player in Corey Brewer (36.6). While Corey Brewer has had a solid career as a role player, he likely was not deserving of the 7th overall pick. At the 7th pick in the 2007 NBA draft, PNSP would’ve had the Wolves take Joakim Noah (99.1), who ended up going 9th to the Chicago Bulls.

Finally, the 2008 draft produced some success from McHale – as the Wolves were on the winning side of the O.J. Mayo-Kevin Love trade. PNSP strongly agreed with this trade for the Wolves, rating Kevin Love as one of the best prospects in the dataset at 99.1, and O.J. Mayo at 78.9. Good job McHale!

For all intents and purposes, we all know the biggest draft blunder was the 2009 NBA draft—and not just because of Stephen Curry! But before we list 64 players better than Jonny Flynn, I want to clarify something that really bothers me: the Timberwolves did not draft four point guards in the first round. They drafted 2! Jonny Flynn and Ricky Rubio. Wayne Ellington was absolutely, 1000% not a PG. Ty Lawson was a player the Timberwolves drafted for the Denver Nuggets. The Wolves did not draft Ty Lawson and trade him after the fact. And Rubio was not coming to play in the NBA for at least 2 years, so while the Timberwolves could’ve opted for a different PG, the general thought process was not completely wrong. Anyway, that rant is really beside the point. Since Rubio did not play college basketball, we can leave him out of the argument for the time being. At the sixth pick in the 2009 NBA Draft, here are a few names PNSP had rated higher than the aforementioned Jonny Flynn.

Obviously there a number of players that had a higher PNSP score than Jonny Flynn’s abysmal 36.6, but if we base the Wolves selection on PNSP, the Wolves would’ve taken Jeff Teague (93.4) at the sixth pick. That means following the 2009 draft, the Wolves would’ve had a core of Joakim Noah, Kevin Love, and Jeff Teague if drafting by PNSP alone. Also, that core would’ve included Al “post-up” Jefferson. Would that have been a good enough core to make title runs? I’m not sure, but frankly, I would love to see Noah and Love in the front court together. Noah running point-center hitting K-Love for wide-open threes sounds just like the Gasol brothers in Spain (joking, kind of).

Now turn the page to 2010. As you might expect, DeMarcus Cousins scored very highly by PNSP with a score of 96.2. While Wesley Johnson (73.4) didn’t rate poorly, there were a number of players rated ahead of him, such as the aforementioned Cousins, Al-Farouq Aminu (89.2), and Paul George (85.6). Let’s say Cousins’ character concerns were too great and he was axed off the board (plus, we’d already have Noah). Then the Wolves would’ve selected Al-Farouq Aminu at 4th overall. Aminu has become a solid 4 man in modern day NBA and vastly underrated by the masses of NBA fans (non-analytics fans, that is).

There isn’t much to say about the 2011 and 2012 drafts. The model liked Derrick Williams (87.7), though PNSP technically liked Iman Shumpert (87.9) slightly more. The Wolves traded their first round pick in 2012.

With Flip Saunders back in the picture in 2013, the Wolves pulled a draft day trade to acquire Shabazz Muhammad and Gorgui Dieng. Trey Burke, the player the Wolves traded, was rated as a 65.6 and Shabazz Muhammad and Gorgui Dieng were rated as 54.0 and 79.5, respectively. This trade was big hit for the Wolves, although they could’ve drafted C.J. McCollum, a player I desperately wanted, at 9. 2013 was a poor draft class, and the Timberwolves did very well in coming out with two solid role players in Muhammad and Dieng.

In 2014, the Wolves selected Zach LaVine 13th overall and eventually traded for Andrew Wiggins (selected 1st overall). PNSP actually had Marcus Smart and Joel Embiid as the top two prospects in the 2014 NBA draft. PNSP liked Andrew Wiggins, but not to the extent of a #1 overall pick. Interestingly, our NBA Role probability model had Andrew Wiggins most likely NBA role as an NBA Starter (with a probability of 49%). Based on Andrew Wiggins’s current NBA production, this might be fairly accurate. Zach LaVine scored a 59.0. LaVine’s shooting has been far superior to what was projected for him based on his college performance. The LaVine-type prospects, players that play low minutes in one college season but have extremely high athletic potential, can be exceptionally difficult to project. Overall, PNSP did not love LaVine and Wiggins, and would’ve opted for Mitch McGary at 13.

The Wolves struck gold in the lottery and landed PNSP’s top ranked prospect in the 2015 draft, Karl-Anthony Towns (93.4). Honestly, there isn’t much to say about Towns… The Wolves did trade up late into the first round from Minnesota’s own Tyus Jones. Tyus’s smart decision making (high assist-to-turnover ratio), good shooting (~90% from free throw line) and a high Box Plus Minus (9.4) made him a solid prospect (PNSP of 71.9) even with his diminutive figure.

Moving to the first pick in the Thibodeau era in 2016, Kris Dunn. PNSP did not love the Dunn selection (42.2), primarily because Dunn needs to be elite on defense in order for him to be successful in the NBA. Additionally, the NBA Role probability Model predicted a 30.7% chance of Dunn becoming an All-Star and also a 30% chance of falling out of the NBA. Dunn’s poor shooting and high turnover numbers in college make it extremely unlikely he becomes a positive offensive contributor. One of Dunn’s top player comps based on our similarity score algorithm is Marcus Smart. Dunn’s potential is likely similar to Smart’s in being a versatile, lockdown perimeter defender who struggles offensively. PNSP would’ve had the Wolves taking Henry Ellenson at the 5th overall pick.

Below is a complete list of players the Wolves would’ve taken if following PNSP, along with where that player was actually drafted (trades were left as is for simplicity except for the Randy Foye-Brandon Roy swap).

At last, we reach the 2017 NBA draft, where the Wolves currently hold the 6th pick (pre-lottery). Quite honestly, I wouldn’t be surprised if Layden and Thibs tune into Model 284 this year to assist in their draft decisions. Anyway, check back closer to draft time for an in-depth breakdown of the top prospects the Wolves should target, and complete PNSP, Similarity Scores, and Role Probabilities for all 2017 NBA Draftees. 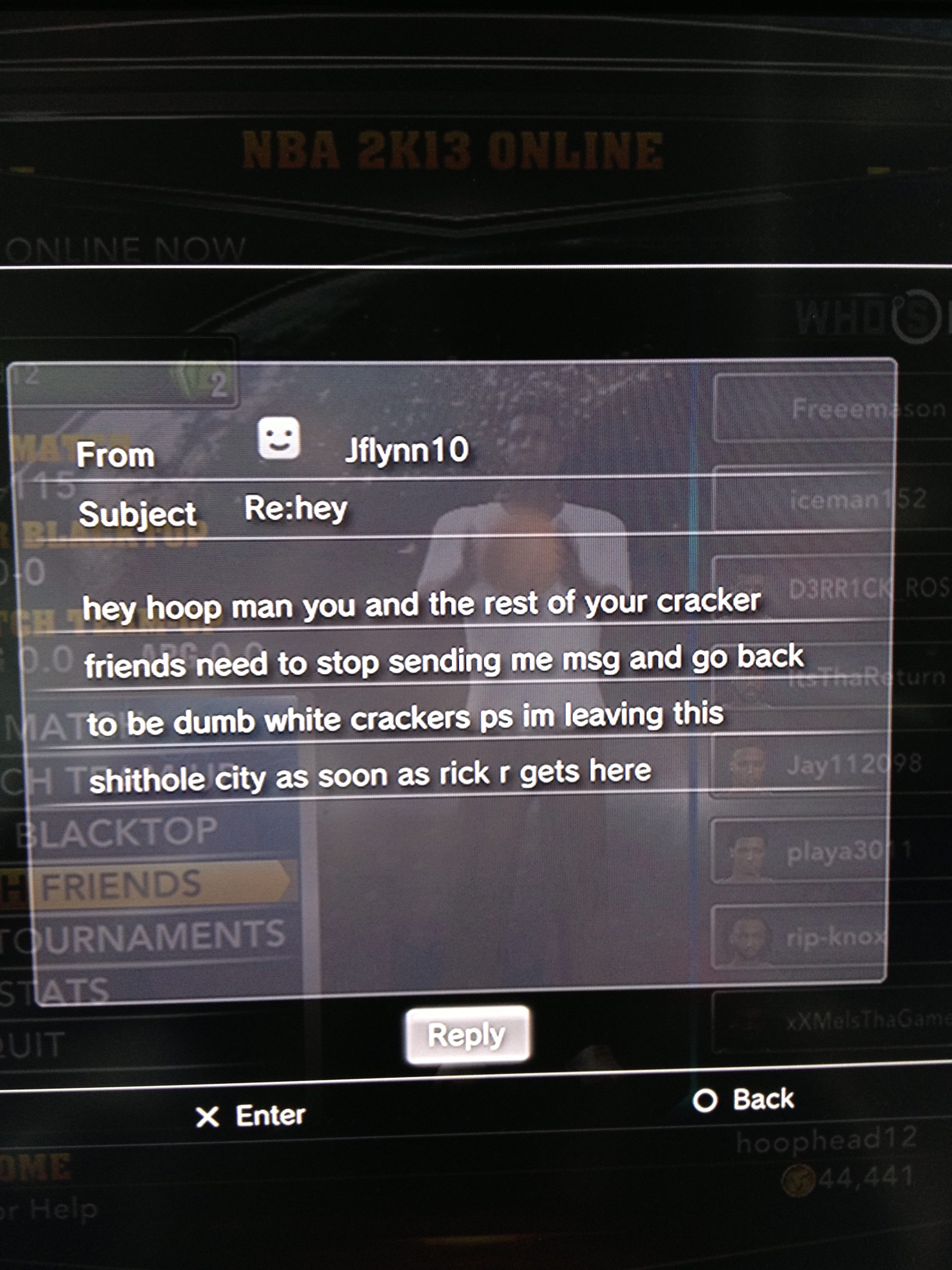